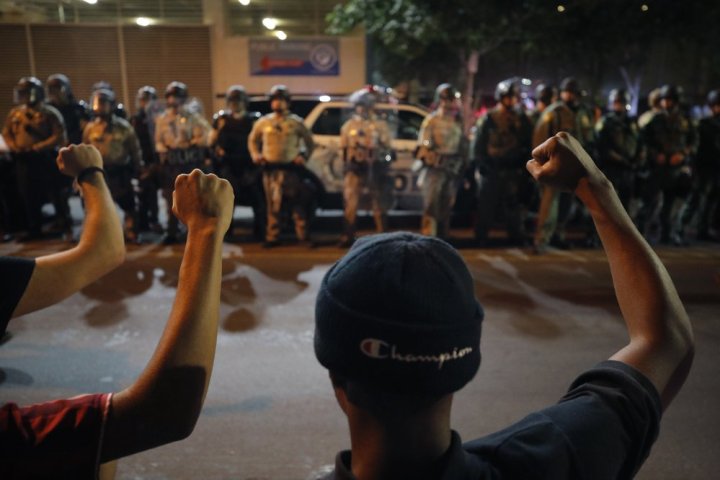 Hours after a carefully orchestrated declaration by U.S. President Donald Trump to send out the military and “dominate the streets,” American cities were engulfed in more violence and destruction that overshadowed peaceful protests demanding justice after generations of racism.

In New York City, largely peaceful demonstrations were punctuated by people smashing storefront windows near Rockefeller Center and breaching the doors to the storied Macy’s store on 34th Street, leaving the major Manhattan thoroughfare littered with broken glass. A vehicle plowed through a group of law enforcement officers at a demonstration in Buffalo, injuring at least two.

Demonstrations erupted from Philadelphia, where hundreds of protesters spilled onto a highway in the heart of the city, to Atlanta, where police fired tear gas at demonstrators, to Nashville, where more than 60 National Guard soldiers put down their riot shields at the request of peaceful protesters who had gathered in front of Tennessee’s state Capitol to honor George Floyd.

Bystander Sean Jones, who watched as people ransacked luxury stores in Manhattan’s chic Soho neighborhood, explained the destruction this way: “People are doing this so next time, before they think about trying to kill another Black person, they’re going to be like, ’Damn, we don’t want them out here doing this … again.’”

The unrest in Minneapolis appeared to stabilize on the same day that Floyd’s brother made an impassioned plea for peace at the location where a white police officer put his knee on the handcuffed Black man’s neck until he stopped breathing last week.

The death toll from the unrest began to mount, including two people killed in a Chicago suburb. The police chief in Louisville was fired after a beloved restaurant owner was killed by security forces during unrest early Monday.

An officer was shot shortly before midnight near the Circus Circus casino in Las Vegas, where police have made 338 arrests during three nights of violence that followed peaceful protests earlier in the day. Police had no immediate word on the officer’s condition.

The latest wave of protests came on the day that Trump portrayed himself as hard-nosed, law-and-order president and police under federal command forced back peaceful demonstrators with tear gas so he could walk to a nearby church and pose with a Bible.

Trump emerged after two days out of public view and threatened in remarks from the White House Rose Garden that he would deploy “thousands and thousands” of U.S. troops. Then he made a surprise walk through Lafayette Park to a Washington house of worship known as “The Church of the Presidents” that suffered fire damage in the protests.

“The president just used a Bible and one of the churches of my diocese as a backdrop for a message antithetical to the teachings of Jesus and everything that our church stands for,” she said.

The nation has been roiled by violence over the death of Floyd for nearly a week. The protests come after years of seeking police reforms over repeated cases of minorities dying in police custody, and at a time when the country is already reeling from the coronavirus outbreak and the Depression-level unemployment.