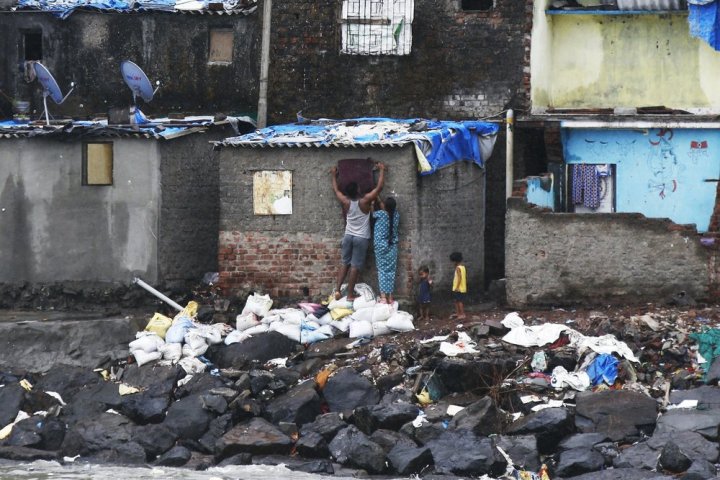 A cyclone made landfall Wednesday south of India‘s financial capital of Mumbai, with storm surge threatening to flood beaches and low-lying slums as city authorities struggle to contain the coronavirus pandemic.

In the state capital Mumbai, the home of Bollywood, India’s largest stock exchange and more than 18 million residents, high winds whipped skyscrapers and ripped apart shanty houses near the beach.

Mumbai hasn’t been hit by a cyclone in more than a century, raising concern about its readiness. In the hours before the storm hit India’s shores, drivers and peddlers deserted Mumbai’s iconic Marine Drive, fishermen yanked their nets out of the wavy Arabian Sea and police shooed people away from beaches.

As the cyclone wended its way up India’s western coast, homes in city slums were boarded up and abandoned, and municipal officials patrolled the streets, using bullhorns to order people to stay inside.

Cyclone Nisarga was forecast to drop heavy rains and sustained winds of 100 to 110 kilometres per hour through Wednesday afternoon after slamming ashore near the city of Alibag, about 98 kilometres south of Mumbai, India’s Meteorological Department said.

The state of Goa, south of Maharashtra, already received 127 milimeters of torrential rain — about a week’s average, the agency said.

Some 100,000 people were evacuated from low-lying areas in Maharashtra and neighbouring Gujarat, according to the Press Trust of India news agency. Both states, already among the hardest hit by the coronavirus pandemic, activated disaster response teams, fearing extensive flooding could further impair overwhelmed health systems.

“If hospitals and clinics are damaged by the cyclone, the city won’t be able to cope with the large number of COVID-19 cases, and social distancing measures will become virtually impossible to follow,” Bidisha Pillai, chief executive of Save the Children in India, said in a statement.

Some 200 COVID-19 patients in Mumbai were moved from a field hospital built beneath a tent to another facility to avoid the risk of strong wind gusts, officials said.

N. Pradhan, director of India’s National Disaster Response Force, said in a video statement that evacuations were nearly complete and that social distancing norms were being followed in cyclone shelters.