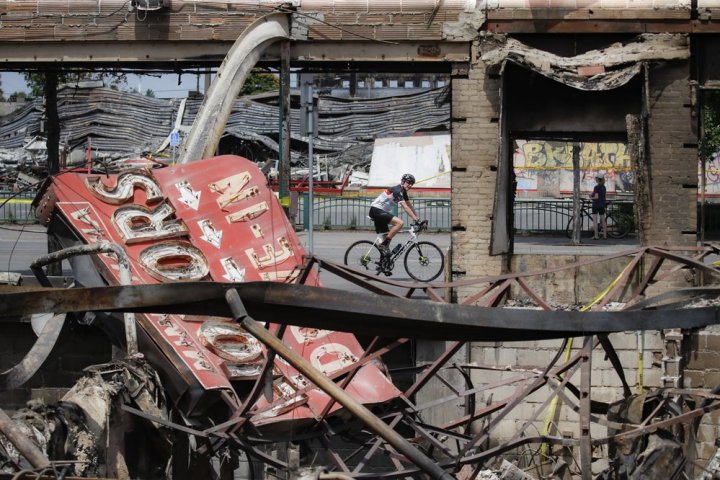 As the protests over the death of George Floyd continue across the U.S., officials have been seeking to assign blame for violence and looting on “infiltrators” and “outside agitators.”

But experts say it isn’t clear who is responsible, and that such conversations distract from the issues at the heart of the protests.

The protests began in Minneapolis, Minn., where Floyd, a 46-year-old Black man, died after a white officer knelt on his neck for more than eight minutes during an arrest.

Floyd’s death acted as a catalyst, igniting protests which have now spread across the U.S. and abroad, including into Canada.

Some of the protests have turned chaotic in a number of cities, with violence and looting reported.

Yohuru Williams, dean of the College of Art and Sciences at the University of St. Thomas in St. Paul and a professor of African-American history, said the violence and looting is likely being done by a combination of many individuals and groups.

“So you do have activists clearly who are defying the curfews — at least in the initial days after the killing of George Floyd — that were engaging in arson and other activities,” he explained.

“And then you have other opportunistic people, individuals and groups who are trying to take advantage of the situation for their own purposes.”

But, not everyone agrees.

Since the protests began, U.S. President Donald Trump has repeatedly claimed — without evidence — that the violence has been instigated by Antifa, a term used to describe a broad range of people with far-left leaning ideologies.

You should also READ  Will travel insurance cover coronavirus? Experts break down why and why not

“It’s ANTIFA and the Radical Left,” he wrote in a tweet on Saturday, “Don’t lay the blame on others!”