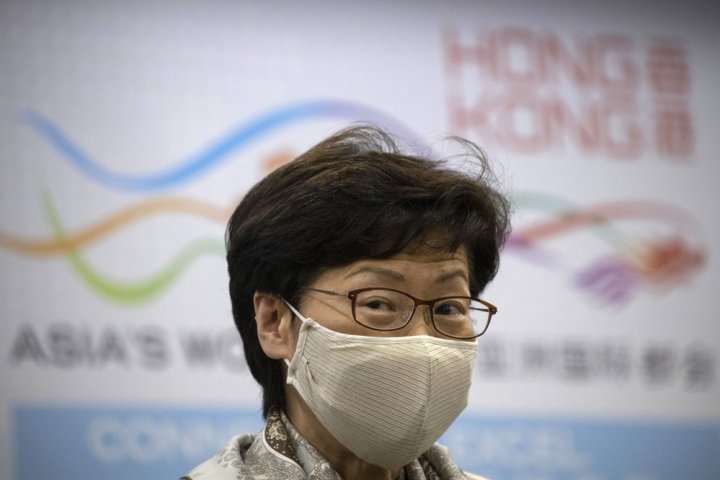 British Prime Minister Boris Johnson announced earlier that his country is ready to open the door to almost 3 million Hong Kong citizens if China enacts a national security law for the city.

Following talks with officials in Beijing, Lam said China has the same right as the U.S. and Britain to enact legislation protecting its national security and that foreign criticism and threats of sanctions could not be justified. She also said China was compelled to take the step at the national level because opposition in Hong Kong’s own legislature and among government critics made it impossible to do so locally.

“I can only say that the international community and some of the foreign governments have been adopting blatant double standards in dealing with this matter and commenting on this matter,” Lam said.

“It is within the legitimate jurisdiction of any country to enact laws to protect and safeguard national security. U.S.A. is no exception. U.K. is no exception,” Lam said. “So why should they object, resist or even condemn and take their sanctions against Hong Kong and the People’s Republic of China for taking similar actions?”

Johnson said in a column published online by the South China Morning Post, a Hong Kong newspaper, that the security law would curtail freedoms in Hong Kong and conflict with China’s obligations under its agreement with the United Kingdom when it took back the former British colony in 1997.

You should also READ  Man in custody after stabbing at London, U.K. mosque

“Many people in Hong Kong fear their way of life — which China pledged to uphold — is under threat,” he wrote. “If China proceeds to justify their fears, then Britain could not in good conscience shrug our shoulders and walk away.”

China shocked many of Hong Kong’s 7.5 million people when it announced earlier this month that it will enact a national security law for the city, which was promised a high level of autonomy outside of foreign and defence affairs.

In Beijing, foreign ministry spokesperson Zhao Lijian reiterated China’s stance that the agreement with the U.K., known as the Sino-British Joint Declaration, was essentially null and void.

“The U.K. has had no sovereignty, governance or supervision over Hong Kong since its return (to Chinese rule),” Zhao said at a daily briefing.

“Therefore, the British side has no right to cite the Sino-British Joint Declaration to make irresponsible remarks on Hong Kong affairs and interfere in China’s internal affairs,” Zhao said.

In her comments, Lam appeared to agree, saying she was operating under Hong Kong’s Basic Law, its mini-constitution, despite critics saying China’s legislature used highly dubious legal grounds to circumvent Hong Kong’s legislature in moving forward with the security legislation.