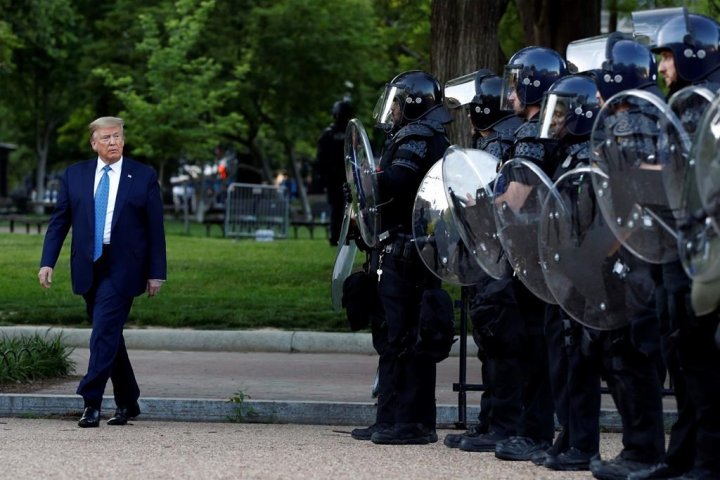 A day after threatening states that he would dispatch the military to quell protests, President Donald Trump appeared to be privately backing off his threat to deploy troops, with White House officials saying this week’s response to demonstrations across the country indicated that local governments should be able to restore order themselves.

The shift came as protests in Washington and other cities over police brutality against minorities proceeded Tuesday with relative calm, a striking contrast to the harsh crackdowns outside the White House on Monday night. The president wanted to make the aggressive action in the nation’s capital an example for the rest of the country, a senior White House official said Tuesday.

The Defense Department has drafted contingency plans for how to deploy active-duty military if needed. Pentagon documents reviewed by The Associated Press showed plans for soldiers from an Army division to protect the White House and other federal buildings if the security situation in the nation’s capital were to deteriorate and the National Guard could not secure the facilities.

But interest in exerting that extraordinary federal authority appeared to be waning in the White House. Though the crackdown on the Washington demonstrations was praised by some Trump supporters Tuesday, a handful of Republicans expressed concern that law enforcement officers risked violating the protesters’ First Amendment rights. The defense secretary also distanced himself from Trump’s decision to walk across Lafayette Park for a photo opportunity at a church after the demonstrators had been cleared.

Pentagon Chief Mark Esper, who walked with Trump to St. John’s Church on Monday evening, insisted he did not know the president’s destination.

“I didn’t know where I was going,” Esper told NBC News. He said he had expected to view damage to a bathroom facility that had been vandalized in Lafayette Park, across from the White House, and talk with National Guard troops positioned there.

The protests have sprung up across the country following the death of George Floyd, a black man who died after a white Minneapolis police officer pinned him down and pressed Floyd’s neck with his knee. Violent demonstrations have raged in scores of American cities, marking a level of unrest unseen for decades.

The situation in Washington escalated Monday, becoming a potent symbol of Trump’s policing tactics and a physical manifestation of the rhetorical culture war he has stoked since before he was elected. Nearly 30 minutes before a 7 p.m. curfew in Washington, U.S. Park Police repelled protesters with what they said were smoke canisters and pepper balls.

“D.C. had no problems last night. Many arrests. Great job done by all. Overwhelming force. Domination,” Trump tweeted Tuesday, after a night in which heavily armed military forces and federal officers swarmed the city. Trump added, “(thank you President Trump!).”

The clampdown on the protesters followed a weekend of demonstrations outside the White House. Trump had been furious about images juxtaposing fires set in the park outside the executive mansion with a darkened White House in the background, according to current and former campaign and administration officials. He was also angry about the news coverage revealing he had been rushed to the White House bunker during Friday’s protests.

He moved to respond aggressively Monday. In an evening address in the Rose Garden, he called on governors to ramp up the National Guard presence in their states to tamp down the protests. If they didn’t abide by those orders, Trump said, he would dispatch the military to their states — a step rarely taken in modern American history.