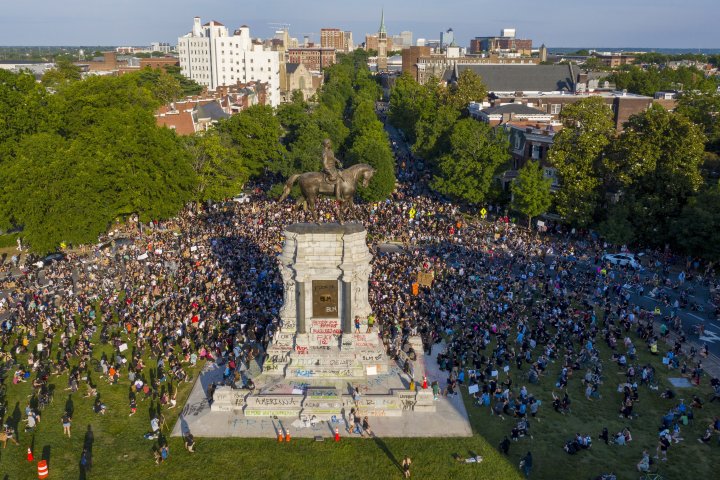 The Democratic governor will direct the statue to be moved off its massive pedestal and put into storage while his administration seeks input on a new location, according to the official, who spoke on condition of anonymity because the official was not authorized to speak before the governor’s announcement.

Many black activists and lawmakers have long called for the statue’s removal and cheered the news.

“That is symbol for so many people, black and otherwise of a time gone by of hate and oppression and being made to feel less than,” said Del. Jay Jones, a black lawmaker from Norfolk. He said he was “overcome” by emotion when he learned the statue was to come down.

The move comes amid turmoil across the nation and around the world over the death of George Floyd, a black man who died after a Minneapolis officer pressed his knee into Floyd’s neck for several minutes, even after he stopped moving.

Floyd’s death has sparked outrage over issues of racism and police brutality and prompted a new wave of Confederate memorial removals in which even some of their longtime defenders have decided to remove them.

You should also READ  Coronavirus: Death toll rises to 291 in Iran as officials struggle to contain virus

The Lee statue is one of five Confederate monuments along Monument Avenue, a prestigious residential street and National Historic Landmark district in Richmond, the former capital of the Confederacy. It has been the target of graffiti during protests in recent days over Floyd’s death, including messages that say “end police brutality” and “stop white supremacy.”

It was not immediately clear when the statue would be removed.

Other tragedies in recent years have prompted similar nationwide soul searching over Confederate monuments, which some people regard as inappropriate tributes to the South’s slave-holding past. Others compare monument removals to erasing history.

Confederate memorials began coming down after a white supremacist killed nine black people at a Bible study in a church in South Carolina in 2015 and then again after a violent rally of white supremacists in Charlottesville in 2017.

The Lee monument was erected in 1890, decades after the end of the Civil War.

Also on Wednesday, Richmond Mayor Levar Stoney announced plans to remove the other Confederate monuments along Monument Avenue, which include statues of Confederate President Jefferson Davis and Confederate Gens. Stonewall Jackson and J.E.B. Stuart. Those statues sit on city land, unlike the Lee statue, which is on state property.