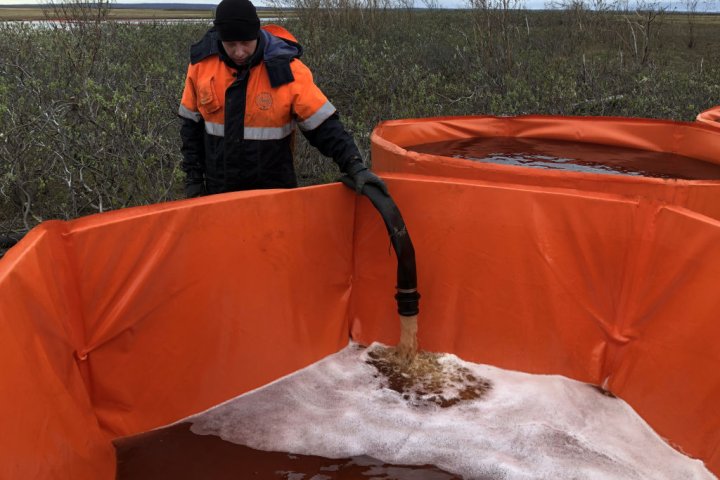 Russian President Vladimir Putin approved a state of emergency in the Arctic city of Norilsk on Wednesday after a huge spill of oil-based chemicals into a river and upbraided a senior official on television over what he said was a bungled state response.

A fuel tank at a power station in the remote, industrial region lost pressure on May 29 and leaked 20,000 tonnes of diesel fuel and lubricants, the Investigative Committee, a law enforcement agency, said. Much of flowed into the river Ambarnaya.

At a televised government meeting to discuss the spill, Putin said he was shocked to find out local authorities had only learned of the incident from social media two days after it happened and scolded the region’s governor Alexander Uss on air.

“What – are we to learn about emergency situations from social networks? Are you alright healthwise over there?” Putin said, waving his hand across his eyes.

The state environment watchdog said 15,000 tonnes of oil products had seeped into the river system with another 6,000 into the subsoil. The state fisheries agency says the river will need decades to recover.

An expanse of crimson water could be seen stretching from shore to shore down a river and one of its offshoots in aerial footage published by the RIA news agency this week.

Putin said he supported a proposal to declare a national state of emergency in the area as it would help the clean-up.

Norilsk, a remote city of 180,000 situated 300 km inside the Arctic Circle, is built around Norilsk Nickel, the world’s leading nickel and palladium producer.

The company says it is doing all it can to clear up the spill and it has brought in specialists from Moscow who have sectioned off the affected part of the river to stop the oil products spreading further.

Dmitry Klokov, a spokesman for the Rosrybolovstvo state fishing agency, described the spill as an ecological catastrophe.

An expanse of crimson water could be seen stretching from shore to shore down a river and an offshoot of the river in aerial footage posted online by the RIA news agency.