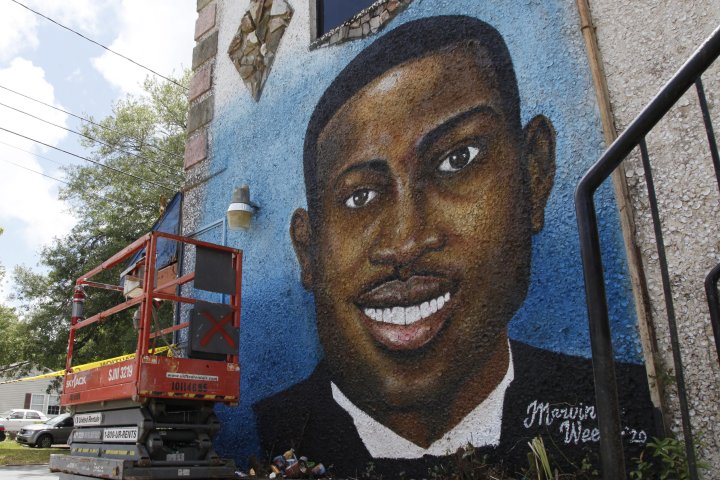 BRUNSWICK, Ga. — Three men who were charged with murder months after the fatal shooting of Ahmaud Arbery appeared Thursday by a video link from jail for their probable cause hearing following a week of angry protests in the U.S. over law enforcement biases against Black victims.

Jesse Evans, appointed as a special prosecutor in the case, said Arbery “was chased, hunted down and ultimately executed” based on the evidence his team would present.

Glynn County Magistrate Judge Wallace E. Harrell scheduled the hearing to determine whether authorities have enough evidence of murder in Arbery’s killing to send the case to trial.

Arbery was killed Feb. 23 after a white father and son armed themselves and gave chase when they spotted the 25-year-old Black man running in their neighbourhood just outside the port city of Brunswick.

It wasn’t until May 7 that those men — Greg McMichael, 64, and Travis McMichael, 34 — were charged with felony murder and aggravated assault. The McMichaels’ arrests came two days after cellphone video of the shooting leaked online and stirred a national outcry.

The neighbour who filmed the video, 50-year-old William “Roddie” Bryan, was also arrested and charged with felony murder and illegally using a vehicle to try to confine and detain Arbery.

Georgia law defines felony murder as a killing caused by the commission of an underlying felony. It does not require intent to kill. The minimum penalty is life in prison with a chance of parole.

Largely peaceful protests following the deaths of George Floyd in Minneapolis, Breonna Taylor in Louisville, Kentucky, and Arbery have led to outbreaks of violence in many larger cities, including Atlanta. Georgia Gov. Brian Kemp promised a “strong state law enforcement presence” in the Brunswick area Thursday to coincide with the court hearing.

Defence attorneys requested the hearing to make prosecutors show whether they have probable cause to charge the men with murder.

Greg McMichael told police after the shooting in February that he suspected Arbery of committing break-ins in the neighbourhood. He said Arbery attacked his son before being shot.

Arbery’s family has said he was merely out jogging. The former high school football player ran to stay in shape and lived less than 2 miles (3.2 kilometres) from the subdivision where he was killed. His mother said he planned to start technical college in the fall to become an electrician.

Defence attorneys for both McMichaels have said much remains unknown about what led to the shooting and have cautioned against rushing to judgment. An attorney for Bryan has said he was merely a witness to Arbery’s death.