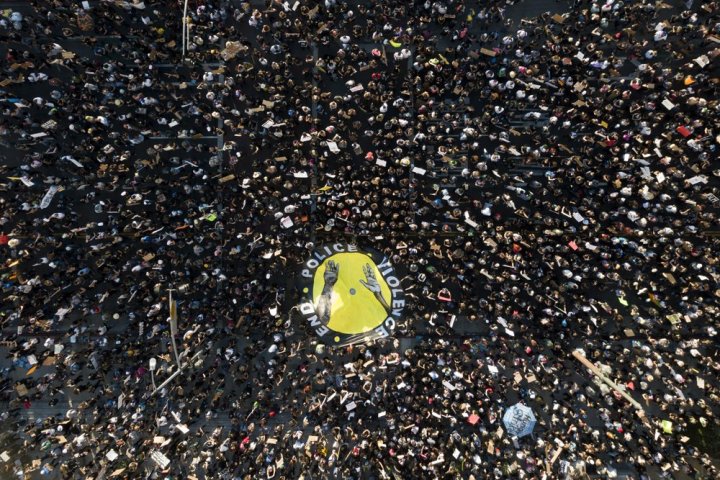 Demonstrations in cities across the U.S. to condemn racism and police abuses remained large but turned notably more subdued on the eve of a Thursday memorial service for George Floyd that kicks off a series of events to mourn the man whose death empowered a national movement.

The calmer protests came on the same day that prosecutors charged three more police officers and filed a new, tougher charge against the officer at the center of the case.

If convicted, they could be sentenced to up to four decades in prison.

The move by prosecutors punctuated an unprecedented week in modern American history, in which largely peaceful protests took place in communities of all sizes but were rocked by bouts of violence, including deadly attacks on officers, rampant thefts and arson in some places.

Nationwide, more than 10,000 people have been arrested in connection with unrest, an Associated Press tally shows. More than a dozen deaths have been reported, though the circumstances in many cases are still being sorted out.

Floyd’s name has become a rallying cry in other countries, too, unleashing protests against police violence and racial injustice.

In the U.S., protests were still big, but largely peaceful in California, where NBA stars Steph Curry and Klay Thompson marched with protesters in Oakland.

Some demonstrators lay down to represent the amount of time a white police officer pressed a knee into Floyd’s neck while he pleaded for air. But police kept a mainly hands-off policy during the day even after curfews took effect.

The first of three memorial gatherings for the man whose name has been chanted by hundreds of thousands of people was planned Thursday afternoon in Minneapolis at a service where the Rev. Al Sharpton, the civil rights leader, and family attorney Ben Crump will speak.

Floyd’s body will then travel to Raeford, North Carolina, where he was born 46 years ago, for a public viewing and private family service Saturday.

There will be a large service Monday in Houston, where Floyd spent most of his life, and will include addresses from Sharpton, Crump, and the Rev. Remus E. Wright, the family pastor. Former Vice President Joe Biden, the presumptive Democratic presidential nominee, may attend. A private burial will follow.