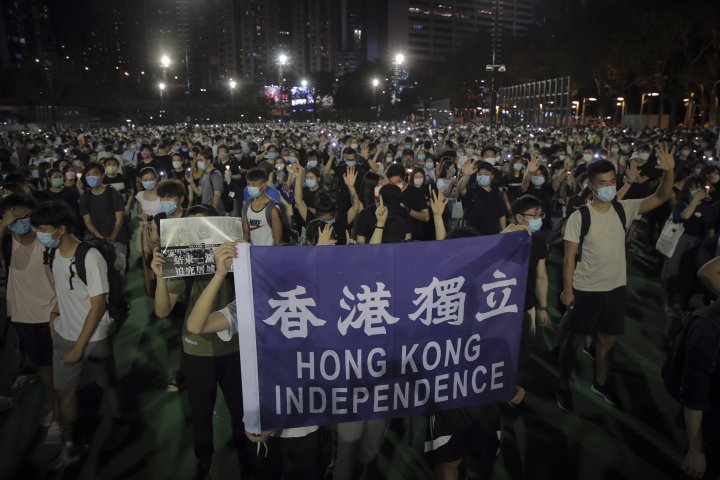 HONG KONG — Thousands of people in Hong Kong defied a police ban Thursday evening, breaking through barricades to hold a candlelight vigil on the 31st anniversary of China’s crushing of a democracy movement centred on Beijing’s Tiananmen Square.

With democracy all but snuffed out in mainland China, the focus has shifted increasingly to semi-autonomous Hong Kong, where authorities for the first time banned the annual vigil to remember victims of the 1989 crackdown.

Beijing is taking a tougher stance following months of anti-government protests last year, in what activists see as an accelerating erosion of the city’s rights and liberties. Earlier Thursday, the Hong Kong legislature passed a law making it a crime to disrespect China’s national anthem after the pro-democracy lawmakers disrupted proceeding twice to try to prevent the vote.

Despite the ban on the vigil, crowds poured into Victoria Park to light candles and observe a minute of silence at 8:09 p.m. (1209 GMT, 8:09 a.m. EDT). Many changed “Democracy now”and also “Stand for freedom, stand with Hong Kong.”

While police played recordings warning people not to participate in the unauthorized gathering, they did little to stop people from entering the park. Authorities had cited the need for social distancing during the coronavirus outbreak in barricading the sprawling park, but activists saw that as a convenient excuse.

In the Mongkok district in Kowloon, large crowds also marked the anniversary. However, when several people tried to barricade a road, police rushed to detain them, using pepper spray and raising a blue flag to warn them to disperse before they would use force on the unauthorized gathering.

On Twitter, Hong Kong police said that “some black-clad protesters are blocking roads in Mongkok. … Police officers are now making arrests.” They urged people not to gather in groups because of the coronavirus.

In a separate Facebook post, police said the situation in Mongkok was dangerous and chaotic, and that it used the “minimum required force” in response.

After the vigil in Victoria Park, groups of protesters dressed in black carried flags that said “Liberate Hong Kong, Revolution of our times” as well as “Hong Kong Independence.”

“We all know the Hong Kong government and the Chinese government really don’t want to see the candle lights in Victoria Park,” said Wu’er Kaixi, a former student leader who was No. 2 on the government’s most-wanted list following the Tiananmen Square crackdown.

Hundreds and possibly thousands of people were killed when tanks and troops moved in on the night of June 3-4, 1989, to break up weeks of student-led protests that had spread to other cities and were seen as a threat to Communist Party rule.