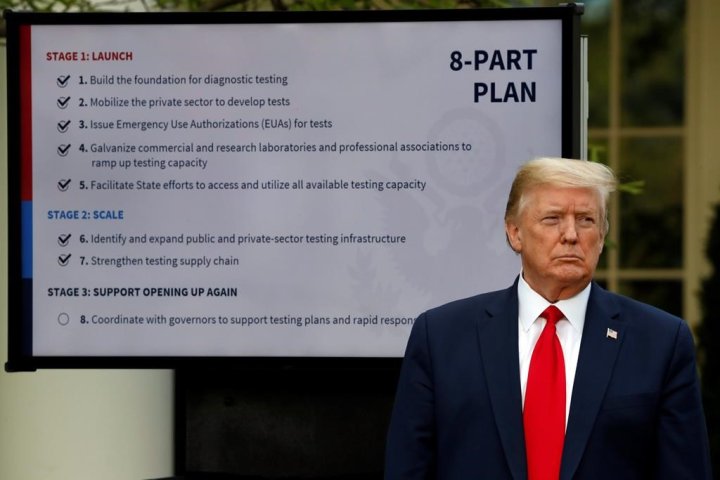 For weeks, President Donald Trump has been eager to publicly turn the page on the coronavirus pandemic. Now fears are growing within the White House that the very thing that finally shoved the virus from center stage — mass protests over the death of George Floyd — may bring about its resurgence.

Trump this week has eagerly pronounced himself the “president of law and order” in response to the racial unrest that has swept across the nation, overshadowing the pandemic that has claimed the lives of more than 105,000 Americans and imperiled his reelection prospects.

But political dangers for the president remain.

Thousands of Americans — many without protective face masks — have jammed the nation’s streets over the past week in defiance of social distancing guidelines from governors and the Centers for Disease Control and Prevention. The White House coronavirus task force, which has dramatically scaled back its operations as states reopen their economies, is scrambling to track the potential impact on infection rates.

Any uptick in cases in the weeks ahead could slow the economic rebirth that Trump’s advisers believe he needs before he faces voters again in five months.

“A second wave, whether now or in September, would obviously be a setback to the economic recovery and Trump’s reelection hopes,” said Republican strategist Alex Conant. “What Trump needs more than anything is a resurgence of consumer and business confidence. A second wave or prolonged civil unrest will undermine that.”

It could take weeks to judge the impact of the nationwide protests on the spread of COVID-19, which had been dramatically ebbing across most of the country before the killing of Floyd, a black man who died after a white Minneapolis police officer pressed a knee on Floyd’s neck for several minutes even after he stopped moving and pleading for air.

Those infected with the virus sometimes take several days to display symptoms, creating a lag in the data. And many protesters were masked and skewed younger — a population that is less affected by the virus but may also have greater numbers of asymptomatic spreaders — complicating predictions.

Dr. Deborah Birx, the administration’s coronavirus coordinator, has been monitoring the protests since they began, looking for indicators of potential resurgence in cases, a White House official said. The official, who spoke on condition of anonymity to discuss internal matters, said Birx was expected to present the task force with early impressions this week but the fuller picture likely won’t be known for some time.

Questions are swirling about whether the White House is prepared to handle a possible resurgence after deliberately placing the government’s public health response on the back burner to put more focus on restarting state economies.

The task force received a stay of execution last month when Trump decided not to dissolve it. The group now has a smaller portfolio as the federal priority shifts to helping states safely reopen and the race for a vaccine has been put under the separate auspices of “Operation Warp Speed.”