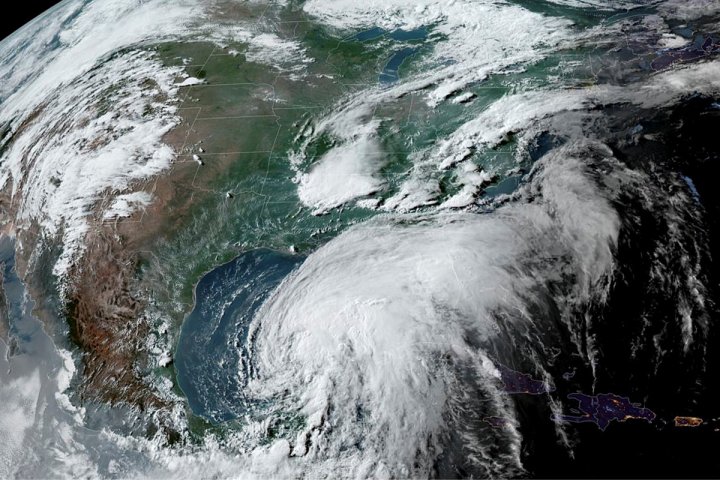 A re-energized Tropical Storm Cristobal is swirling in the southern Gulf of Mexico on a path expected to take it to the U.S. Gulf Coast along with the heavy rains that already caused flooding and mudslides in Mexico and Central America.

After weakening to a tropical depression while moving over land in Mexico’s Gulf coast, Cristobal headed back into the southern Gulf from the Yucatan Peninsula on Friday and powered back up into a tropical storm.

The U.S. National Hurricane Center said Cristobal’s maximum sustained winds had strengthened to 45 mph (75 kph) by late Friday and it was moving north at 14 mph (22 kph). The storm was centred about 440 miles (705 kilometres) south of the mouth of the Mississippi River.

Cristobal was forecast to pass through the central Gulf on Saturday and close in on the U.S. coast by Sunday night, gaining some more strength but not growing into a hurricane.

The Hurricane Center said the storm could cause heavy rains from East Texas to Florida this weekend and into early next week. A tropical storm watch was posted for the northern Gulf of Mexico coast from Intracoastal City, Louisiana, to the Alabama-Florida border.

In Louisiana, Gov. John Bel Edwards has declared a state of emergency to prepare for the storm’s possible arrival.

“Now is the time to make your plans, which should include the traditional emergency items along with masks and hand sanitizer as we continue to battle the coronavirus pandemic,” Edward said in a statement released Thursday.

Cristobal formed this week in the Bay of Campeche from the remnants of Tropical Storm Amanda, which had sprung up last weekend in the eastern Pacific and hit Central America. The two storms combined to soak the region with as much as 35 inches (89 centimetres) of rain in some areas over the past week. At least 30 deaths have been attributed to the two storms and the flooding and landslides they unleashed.

In Bacalar, in the south of Mexico’s Quintana Roo state, 230 families were isolated by the rains and had to be airlifted out, David Leon, Mexico’s national civil defenceco-ordinator, said Friday. Leon added there had been light damage in 75 municipalities in seven states.