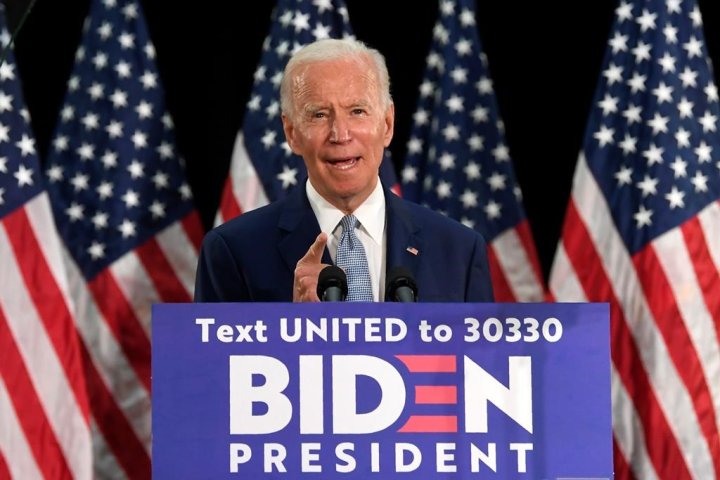 Joe Biden formally clinched the Democratic presidential nomination Friday, setting him up for a bruising challenge to President Donald Trump that will play out against the unprecedented backdrop of a pandemic, economic collapse and civil unrest.

“It was an honour to compete alongside one of the most talented groups of candidates the Democratic party has ever fielded,” Biden said in a statement Friday night, ”and I am proud to say that we are going into this general election a united party.”

The former vice-president has effectively been his party’s leader since his last challenger in the Democratic primary, Bernie Sanders, ended his campaign in April. But Biden pulled together the 1,991 delegates needed to become the nominee after seven states and the District of Columbia held presidential primaries Tuesday.

Biden reached the threshold three days after the primaries because several states, overwhelmed by huge increases in mail ballots, took days to tabulate results. Teams of analysts at The Associated Press then parsed the votes into individual congressional districts. Democrats award most delegates to the party’s national convention based on results in individual congressional districts.

Biden now has 1,993 delegates, with contests still to come in eight states and three U.S. territories.

The moment was met with little of the traditional fanfare as the nation confronts overlapping crises. While Biden has started to venture out more this week, the coronavirus pandemic has largely confined him to his Wilmington, Delaware, home for much of the past three months.

You should also READ  Coronavirus and four Yoruba proverbs

The country faces the worst rate of unemployment since the Great Depression. And civil unrest that harkens back to the 1960s has erupted in dozens of cities following the death of George Floyd, a black man who died when a white Minneapolis police officer pressed his knee into Floyd’s neck for several minutes even after he stopped moving and pleading for air.

It’s a confluence of events that no U.S. leader has faced in modern times, made all the more complicated by a president who has at times antagonized the protesters and is eager to take the fight to Biden.

Biden spent 36 years in the Senate before becoming Barack Obama’s vice-president. This is 77-year-old Biden’s third bid for the presidency and his success in capturing the Democratic nomination was driven by strong support from black voters.

He finished an embarrassing fourth place in the overwhelmingly white Iowa caucuses that kicked off the nomination process in February. Biden fared little better in the New Hampshire primary, where his standing was so low that he left the state before polls closed on election night to instead rally black voters in South Carolina.