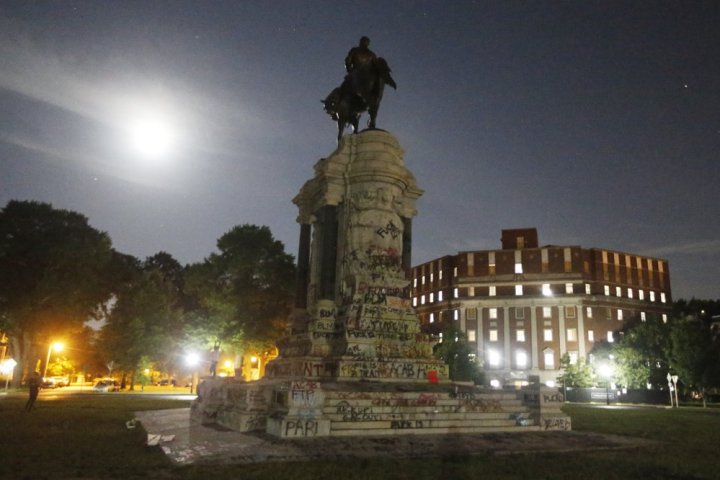 David Harris Jr., a nephew of humanitarian and tennis legend Arthur Ashe, tried for decades to get a street named after his uncle in Richmond, the hometown that once denied Ashe access to segregated public tennis courts.

Finally, in 2019, the City Council approved the renaming over the objections of some city residents. So it was gratifying, Harris said, to see Virginia‘s governor announce plans to remove an iconic statue of Confederate Gen. Robert E. Lee after days of protests over the death of George Floyd.

“My hat is off to them for getting this done,” Harris said Friday. “It took me 25 years to get the street name changed. I commend these young folks for getting these guys to see it within a week and a half.”

In recent days, amid an extraordinary outpouring of grief over Floyd’s death, Virginia Gov. Ralph Northam has pledged to remove the Lee statue, while city leaders have also committed to taking down the other four Confederate memorials along Richmond’s prestigious Monument Avenue.

The changes amount to a reshaping of how one of America’s most historic cities tells its story in its public spaces — and a rethinking of whom it glorifies.

“It’s been a long time coming. … We’ve tried marches, petitions, protests, going to city council” to get the Confederate monuments removed, said Phil Wilayto, a longtime community organizer and activist with the Virginia Defenders for Freedom, Justice & Equality. “And it took what is in effect a mass uprising of the community to say these things are not acceptable.”

You should also READ  Trump’s role in coronavirus briefings may be reduced after disinfectant remarks: sources

Republican lawmakers, Confederate heritage groups and a Monument Avenue preservation group have criticized the decisions. Many have equated the monuments’ removal to erasing history.

“Attempts to eradicate instead of contextualizing history invariably fail,” Senate GOP leaders said in a statement.

Floyd, a black man in Minneapolis, died after a white officer jammed his knee into his neck for nearly nine minutes as other officers watched. Video captured Floyd’s arrest and final moments, and his death has sparked protests around the world that demonstrators have vowed to turn into a sustained movement focused on addressing racial injustice.

The Richmond monument decisions, part of a wave of Confederate monument removals around the country, has stunned some observers in this former capital of the Confederacy, a place where even three years ago many residents said they considered removing the statues impractical, or nearly impossible due to a state law that protected war memorials.

The new Democratic majority at the General Assembly rewrote that law earlier this year, an effort led by black women lawmakers. It will take effect July 1, giving Richmond and other localities around the state permission to do as they please. The Lee statue, meanwhile, was on state property.

“Yes, that statue has been there for a long time,” Northam said Thursday. “But it was wrong then, and it is wrong now. So we’re taking it down.”