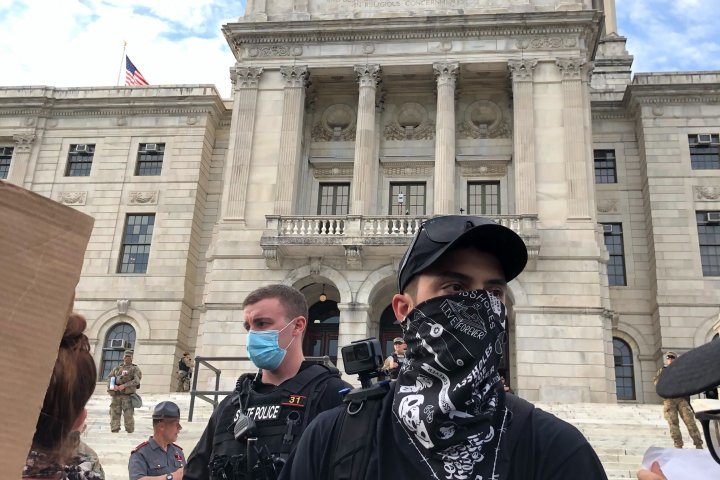 Officials apologized to a black Rhode Island firefighter who says he was racially profiled by a pair of police officers who approached him with guns drawn as he sat in a car outside his own fire station.

In an emotional interview with WPRI-TV, Terrell Paci said he was on duty, in uniform and chatting Wednesday night with a friend who was dropping off food when the unidentified officers approached, demanding to know if he was armed.

“I was dressed in full uniform and had my radio in hand,” Paci, 23, said in the interview, which was broadcast Friday night from a Providence protest rally that drew more than 10,000 people.

“I was like, `I’m a firefighter, I’m PFD, I’m one of you — don’t shoot,’ and they still kept approaching the vehicle with guns drawn,” Paci said, fighting tears.

Paci said one of the officers searched his friend’s car before driving off. Hours later, he said, a Providence police sergeant visited the fire station and apologized after having viewed body camera footage.

Mayor Jorge Elorza called Paci’s account “deeply disturbing” and said the city has launched an investigation. The exchange occurred after a 9 p.m. curfew that had been enacted in the aftermath of violent confrontations between police and vandals who targeted a downtown mall two nights earlier.

“No one should have to experience something like this and we apologize on behalf of our city for the trauma it has caused,” the Democratic mayor said in a statement. “We stand with Firefighter Paci and thank him for his unwavering dedication to a city that he protects everyday through his service.”

You should also READ  Biggest threat to Brazil’s coronavirus response may be its own leader: medical journal

Police spokeswoman Lindsay Lague said the department would investigate and video of the exchange would not be released until the investigation was completed.

In a statement issued late Saturday, the Providence chapter of the Fraternal Order of Police insisted the incident did not involve racial profiling and defended the officers involved. It said police were searching for two suspects who held up an individual by gunpoint and knifepoint, and the car Paci and his friend were sitting in matched the description of the vehicle in which the suspects fled.

Derek Silva, president of the Providence Firefighters Union, said on Twitter that “this situation makes clear that even in uniform, a young black man is not immune form the impact of systemic, institutional racism.”

“While we value our working relationship with the Providence police, and know that there are many officers working to change police culture, this incident proves that there is more work to be done,” Silva tweeted.