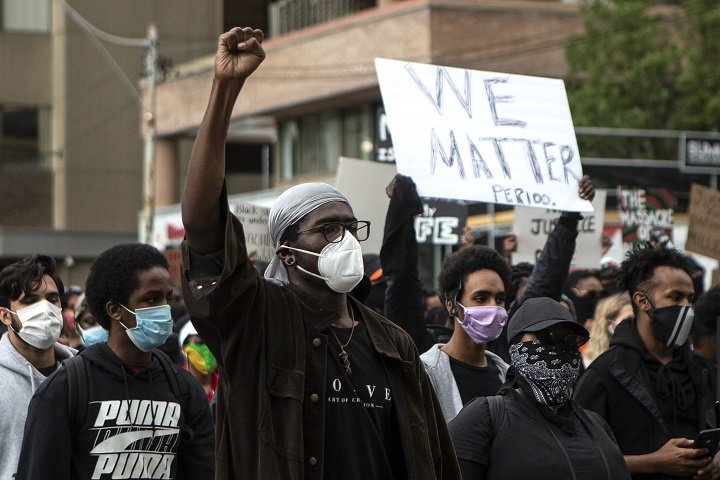 Prominent American academic and author Michael Eric Dyson says the current wave of anti-racism protests swelling across the United States, Canada and the world are unlike any others in the fight to dismantle systemic inequalities, and show the status quo is no longer an option.

Dyson was one of several guests joining The West Block‘s Mercedes Stephenson on Sunday to discuss the powerful and historic movement over recent weeks galvanized by the death of George Floyd after a Minnesota police officer knelt on his neck for eight minutes during an arrest.

“I think that this struck a nerve. Perhaps because we all saw him crying for his mother. Perhaps we all saw he was defenceless, begging for his life. Perhaps it snapped something in us because we have seen it before with Eric Garner in New York City a few years ago … and now again,” he said.

“It’s being picked up all over the world precisely because at this particular moment there has been a determination among masses of people in this country that this must end now. There is no next time. We’ve got to fix it and we’ve got to address it right now.”

Video of Floyd’s arrest in Minneapolis two weeks ago showed him pleading with the officers arresting him and saying that he could not breathe. Still, none of the officers intervened to stop the other with his knee pressed into the back of Floyd’s neck until after he went unconscious.

The video showed Floyd was not resisting arrest.

All four officers involved in his death have since been fired.

Minnesota officials agreed on Friday to ban the use of chokeholds by police and to make it a requirement for officers to report and intervene any time they see another officer using unauthorized force.

While there have been some riots, the vast majority of the solidarity and anti-racism protests responding to Floyd’s death have been peaceful. Despite that, many police in the United States have responded with brutal force against not just rioters but peaceful protesters and journalists as well.