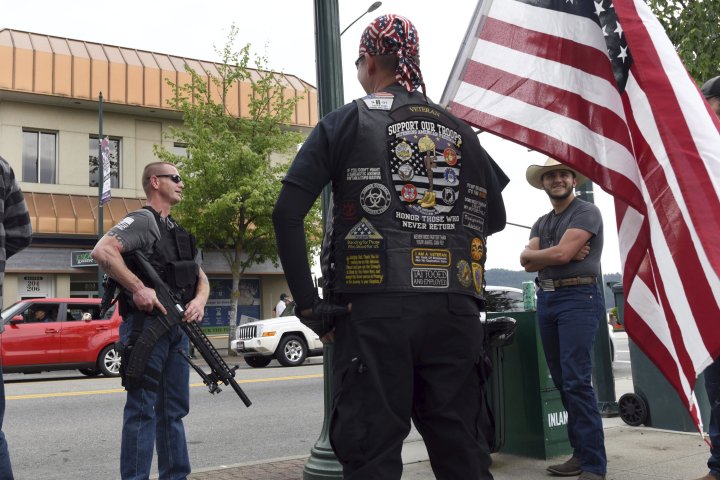 Hundreds of armed, primarily white vigilantes have come out in recent days not to protest the death of George Floyd, but to defend their small towns from Antifa “invasions” that haven’t happened.

These would-be vigilante groups seem to have fallen for a far-right hoax on social media, which warns that busloads of anti-fascist agitators are being sent to small towns to destroy their white-owned farms and businesses. There is currently no evidence to support that claim, according to media reports and statements by multiple police departments across the United States.

Nevertheless, groups of right-wing gun-lovers have been standing on guard against a made-up invasion in recent weeks, amid unproven claims from the White House that protest-related looting is the work of Antifa, rather than opportunistic protesters. U.S. President Donald Trump has even attempted to label Antifa as a terrorist organization — although it’s much closer to an unorganized movement of far-left individuals.

One group of a few hundred vigilantes showed up in Klamath Falls, Ore., on May 31, where they brandished their weapons across the street from a Black Lives Matter protest but remained peaceful, NBC News reports.

Smaller groups have done the same thing in Coeur D’Alene and a few other Idaho towns in recent days, according to the Spokesman-Review newspaper.

In Forks, Wash., dozens of would-be vigilantes accused a multi-racial family of being Antifa agents because they were camping in a school bus, according to the Clallam County Sheriff’s Office. The group allegedly confronted the family in a parking lot, then knocked down trees in the woods to block their path later that same night, in a case that is now under criminal investigation.

Sheriff’s departments in Curry County, Ore., and Payette County, Id., have also received a flurry of calls about “Antifa buses” coming into their areas, but have not found any evidence to back those claims up.

The latest version of the hoax appears to claim that Sparta, Ill., is next. “Antifa terrorists to be bused to Sparta, Illinois with orders to burn farm houses and kill livestock in rural ‘white’ areas,” several false Facebook posts say.

“We have no evidence leading us to believe this threat is at all credible,”  the Randolph County Sheriff’s Department told an ABC affiliate. “It would appear that the author’s goal is to place fear in our community members, thereby creating fear and discontent.”

Some often-repeated posts about the “invasions” feature a doctored photo showing two buses with the words “Soros Riot Dance Squad” edited onto them, the Associated Press reported in a fact-check last week.

That Soros is George Soros, a Jewish Hungarian-American billionaire and Democratic donor who is often portrayed — without evidence — as the boogeyman and puppet-master behind various far-right conspiracy theories over the years.