Biden, other Democrats push back on police defunding debate amid Trump’s attacks 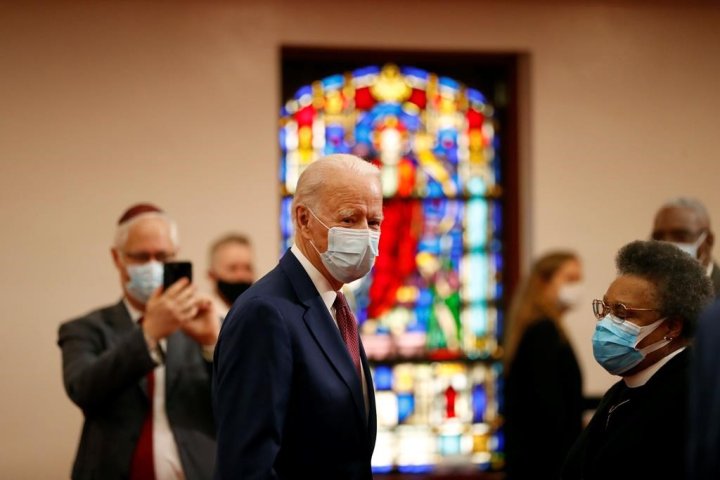 President Donald Trump and his allies have seized on calls to “defund the police” as a dangerous example of Democratic overreach as the Republican president fights for momentum amid crises that threaten his reelection.

Key Democrats, including presumptive presidential nominee Joe Biden, are distancing themselves from the “defund” push, which some supporters say is a symbolic commitment to end systemic racism and shift policing priorities rather than an actual plan to eliminate law enforcement agencies.

But confusion over the proposal’s intent has created an opportunity for Trump, who has struggled to navigate the delicate debate over racial justice, risking support from people of color, suburban women and independents less than five months before Election Day.

Facing increasing pressure to weigh in, Biden addressed the issue Monday in an interview with “CBS Evening News.”

“I don’t support defunding the police. I support conditioning federal aid to police based on whether or not they meet certain basic standards of decency, honorableness and, in fact, are able to demonstrate they can protect the community, everybody in the community,” Biden said.

Other opponents of the movement include Sen. Cory Booker, D-N.J., a former presidential candidate and one of two black Democratic senators, and Rep. Karen Bass, D-Calif., head of the Congressional Black Caucus.

NAACP President Derrick Johnson, in an interview, also declined to endorse calls to defund the police.

You should also READ  The Pacific Ocean is now so acidic, Dungeness crab shells are dissolving

“I support the energy behind it. I don’t know what that substantively means. As I’m talking to people about the concept, I’ve gotten three different explanations,” said Johnson, who has criticized Trump. “We know there has to be a change in the culture of policing in this country.”

Democrats are well-positioned to win over the political center this fall, according to Republican pollster Frank Luntz, who said Trump’s uneven actions and rhetoric at a time of sweeping social unrest are “killing him.”

Luntz added, however, that Democrats risk their advantage by embracing policies viewed as radical following the death of George Floyd in Minneapolis. The handcuffed black man died after a white officer pressed his knee into Floyd’s neck for more than eight minutes.

Municipal officials in Minneapolis have endorsed the “defund the police” language backed by some civil rights activists and a handful of progressive House Democrats. Protesters over the weekend also painted “DEFUND THE POLICE” in large yellow letters on a street close to the White House.

But there was little evidence that the effort was gaining momentum in Congress. Some Democrats described it as bad politics, even if most Democrats shared the desire to overhaul policing.