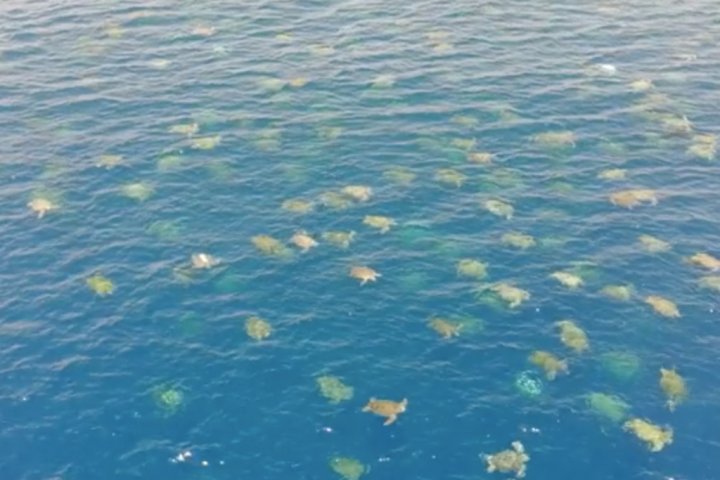 Nesting season in Australia has kicked off with a stunning aerial view of thousands of turtles congregating on the edge of the Great Barrier Reef.

Researchers with the Raine Island Recovery Project were able to count approximately 64,000 turtles using a drone.

“We’re seeing the world’s largest aggregation of green turtles captured in these extraordinary drone images that are helping to document the largest turtle numbers seen since we began the Raine Island Recovery Project,” Anna Marsden, the foundation’s managing director, said in a news release.

The project is helping improve and rebuild the island’s nesting beaches by building fences to prevent turtle deaths and strengthening the island’s resilience.

The green turtle is endangered and under threat thanks to hunting, over-harvesting their eggs and loss of beach nesting sites, CNN says. They also often get trapped in fishing equipment.

“We sort of became aware that although there are these massive aggregations, the actual reproduction isn’t working so well,” Dr. Andrew Dunstan, from the Department of Environment and Science, told CNN. He explained that his team noticed turtles were falling off cliffs, becoming trapped in the heat and suffering flooding of their nests.

The group discovered, in the research conducted in December, that using drones to monitor green turtle activity was more accurate and much safer than using boats to count them, their research shows.

Previously, the group would mark turtles with non-toxic paint and count them from a small boat.

“Trying to accurately count thousands of painted and unpainted turtles from a small boat in rough weather was difficult. Using a drone is easier, safer, much more accurate, and the data can be immediately and permanently stored,” Dunstan, senior research scientist and lead author of the paper, said in a statement.

He added that they’re finding 1.73 times as many turtles with a drone than when they did with a boat.

And it provides jaw-dropping footage for sea enthusiasts to obsess over, too.