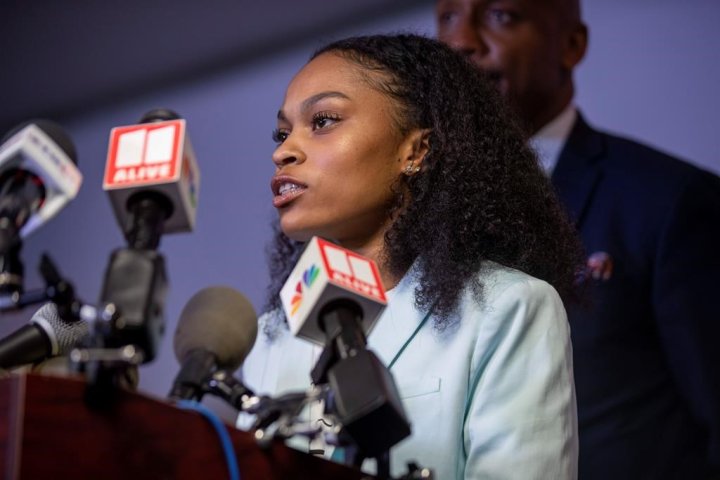 Two more Atlanta police officers were fired Wednesday over an incident in which two college students were pulled from a car in traffic during a large protest against police brutality, authorities said.

Sgt. Lonnie Hood and Officer Armon Jones were fired as a result of their involvement in the May 30 incident, police spokesman Sgt. John Chafee said in an email.

Atlanta Mayor Keisha Lance Bottoms and police Chief Erika Shields previously announced the firing, less than 24 hours after the encounter, of two other officers who were involved. The four fired officers and two others face criminal charges stemming from the incident.

Body camera footage shows a group of Atlanta police officers confronting 22-year-old Messiah Young and 20-year-old Taniyah Pilgrim in a car in downtown traffic caused by protests sparked by the killing of George Floyd in Minnesota. Video shows the officers shouting at the students, firing Tasers at them and dragging them from the car. Throughout the confrontation, the couple can be heard screaming and asking what they did wrong.

The two students are rising seniors at historically black colleges near downtown Atlanta, Young at Morehouse College and Pilgrim at Spelman College.

Jones is charged with aggravated battery for hurting Young’s left arm when he dragged him from the car and slammed him onto the street, a warrant says. He also is charged with pointing a gun at Young. Young suffered a fractured arm and a gash requiring two dozen stitches.

The two officers who were previously fired — Investigator Ivory Streeter and Investigator Mark Gardner — filed a lawsuit Monday against the mayor and police chief alleging violations of their due process rights. Gardner and Streeter are each charged with aggravated assault for using their Tasers on the couple, arrest warrants say.

Willie Sauls is charged with aggravated assault for pointing a Taser at Pilgrim and with criminal damage for repeatedly hitting and damaging the driver’s side window of the car, according to warrants.

Roland Claud is charged with criminal damage for breaking the car’s window, a warrant says.

All of the charged officers are black except for Claud, who’s white. Atlanta Police Department sworn personnel is about 61 per cent black, according to 2019 numbers provided by the department.