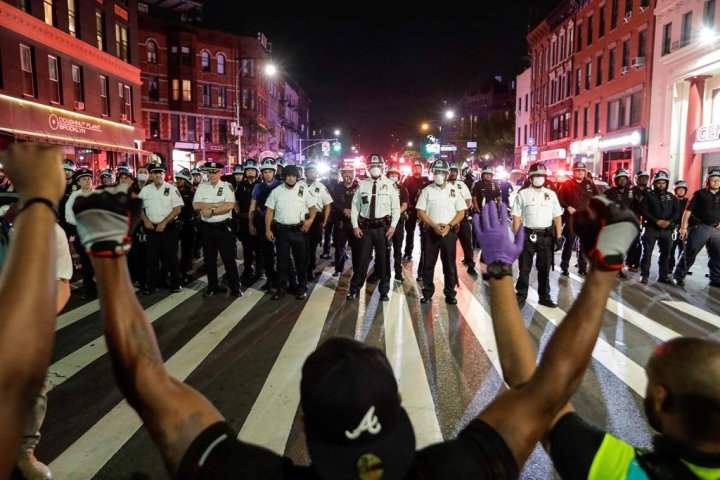 The measure to make officers’ records and misconduct complaints public is among several police accountability bills racing through the state legislature. Lawmakers passed other bills that would provide all state troopers with body cameras and ensure that police officers provide medical and mental health attention to people in custody.

Many of those bills were first proposed years ago, but got new momentum after huge protests nationwide condemned police brutality.

The passage came as criminal charges were brought Tuesday against an NYPD officer over his rough treatment of a protester during demonstrations following the death of Floyd, who pleaded he couldn’t breathe as a white Minneapolis police officer pressed a knee on his neck May 25.

Eliminating the law, known as Section 50-a, would make complaints against officers, as well as transcripts and final dispositions of disciplinary proceedings, public for the first time in decades.

Gov. Andrew Cuomo, who has recently supported reforming the law, has said in the wake of the protests that he will sign the repeal. Only Delaware has a similar law.

Momentum for ending the secrecy law reached a crescendo in recent days as marchers filled streets in Brooklyn, Manhattan and elsewhere to rally against police abuses — amplifying the calls of reform advocates who spent years pushing for change in the wake of other high-profile police killings, including that of Eric Garner in 2014.

“This is no time for rejoicing,” said State Senator Kevin Parker, a Democrat representing parts of Brooklyn. “This bill has been around for over a decade … And the only reason why we’re bringing it to the floor now because the nation is burning.”

Several family members of New Yorkers killed by police officers gathered at New York City Hall Tuesday to call for the defunding of police and repealing 50-a, which state courts have cited in decisions to withhold officers’ personnel records.

“We are tearing down the wall of secrecy that has been shielding officers across the state,” said Constance Malcolm, mother of the late Ramarley Graham, who was unarmed when he was shot to death by a white NYPD officer in the bathroom of his apartment in 2012.

The state Senate and Assembly passed the 50-a repeal largely along party lines, as Republicans argued the law would allow the release of unsubstantiated or false complaints against officers.

But one of the bill’s sponsors, Sen. Jamaal Bailey, a Bronx Democrat, said the public has a right to view complaints: “Sometimes unsubstantiated complaints happen because people don’t want to follow up.”