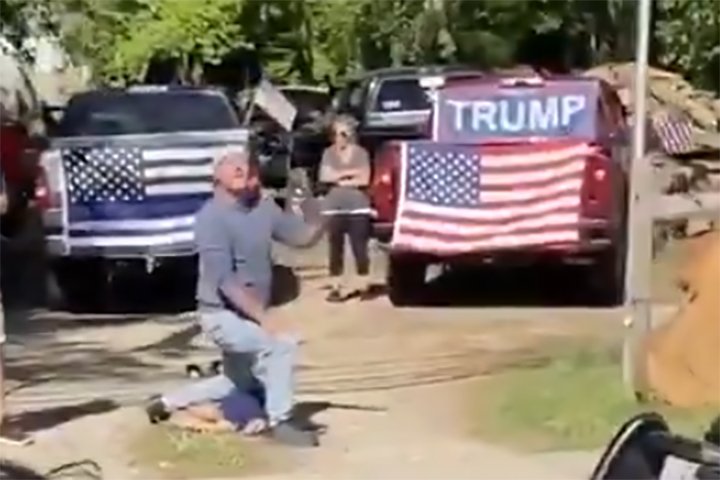 WARNING: This story contains depictions of violence and coarse language that some readers may find offensive. Please read at your own discretion.

The incident happened during an anti-racism protest involving about 70 people in Franklin Township, N.J., according to reports. Several white men reportedly showed up in pickup trucks decked out in American and pro-Trump flags and started yelling slogans such as “all lives matter” and “white lives matter” at the demonstrators as they drove and marched by.

The protesters were denouncing the death of Floyd, a 46-year-old Black man who died in Minneapolis, Minn., after a police officer knelt on his neck for nearly nine minutes. That officer, Derek Chauvin, was later fired and charged with second-degree murder after disturbing video of the incident surfaced online.

Footage recorded from Monday’s protest shows two white men re-enacting the circumstances of Floyd’s death while the protesters pass them. One man can be seen lying on the ground as though pinned, while another plays the role of the police officer who knelt on Floyd’s neck. The kneeling man can be seen angrily shouting at the demonstrators, with a “Trump” banner and American flags hanging on the trucks behind him.

Multiple videos of the incident have been posted online, including at least one from the group’s perspective. The counter-protesters can be heard swearing at the protesters.

Protest organizer Daryan Fennal said she broke out in tears when she saw and heard the counter-protesters.

“I was thinking about the kids who were marching behind me,” she told the New York Times. “That’s not something easily unseen.”

Fennal, 21, told the Times that the men shouted several racist comments at them, such as “Black Lives Matter to no one,” “go cash your cheques” and “start running.” They also allegedly said that “if George Floyd would have complied he wouldn’t be dead.”

The protesters responded by chanting their slogans and shouting down the racist remarks.

“The display yesterday showed me that racism is real, racism is alive, it’s right next door to you,” she said in a separate interview with NBC 10.

The New Jersey Department of Corrections says it suspended one of its employees after confirming that he was part of the “hateful and disappointing” incident.