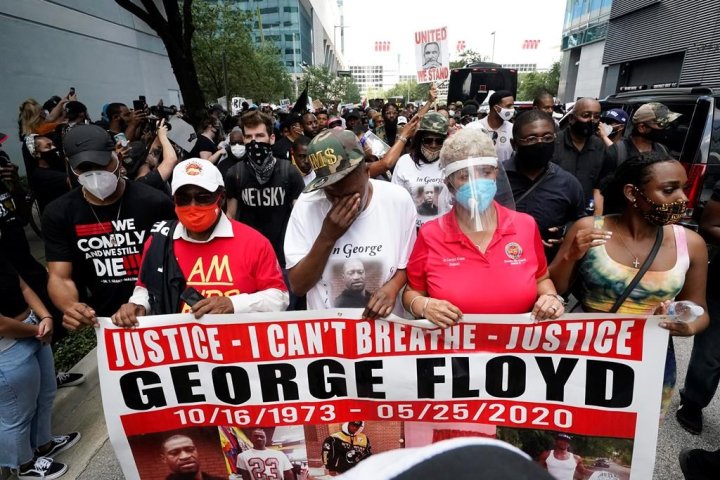 As protests continue in protest against the death of George Floyd, the United Nations, (UN) Secretary General, Antonio Guterres has been asked to ensure the global body takes decisive actions to stem the rising tide of racial discrimination.

Nigeria’s leading labour and civil society coalition in a statement on Wednesday also expressed solidarity with the wave of protests spurred by the May 25 killing of 46-year old US citizen, Mr George Floyd.

Alliance for Surviving COVID-19 and Beyond, (ASCAB) said in a position endorsed by its leaders, ASCAB Chairman, Mr Femi Falana, the co-chairmen, Nigerian Labour Congress, (NLC) and President, Mr Ayuba Wabba and the President of the Trade Union Congress, (TUC) Mr Quadri Olaleye that the death of Mr Floyd has further raised the need for the UN Nations countries all over the world to rise in defense of the poor and vulnerable who are at the receiving end of state brutality and oppression.

ASCAB said racism is an international scourge that can only be defeated through the collective efforts of all member nations. ASCAB said the Sustainable Development Goals cannot be achieved as long as justice is viewed from the prism of race and colour.

The group which is a coalition of labour and over 70 civil society groups called for international cooperation of workers and civil society to put pressure on their home governments to respect the dignity of the human person and the rule of law.

Floyd was killed during an arrest for allegedly using fake bill. White Police officer Derek Chauvin choked Floyd’s neck for about nine minutes while held face down in the most gruesome manner.

The death of Floyd in the hands of Minneapolis police officers has sparked global outrage with protests spreading across US cities and Europe.

ASCAB in a statement on Thursday said labour and civil society in Nigeria are in full support of the protesters adding that the killing underlined that the lack of respect for the dignity of man and extra-judicial killings remain a global problem.

“We share in the grief of the families of Mr George Floyd of Houston who was killed in the most bizarre manner. The police officers became the enforcer of law, the judge and the executioner all within minutes. While such killings are not uncommon in developing countries, it is more worrisome that a country that lay claim to being the father of democracy can allow this to happen”, the statement released by ASCAB Secretary for Publicity, Mr Adewale Adeoye noted.

ASCAB urged countries to take joint and separate actions to bring an end to racism and all forms of discrimination.

“Humanity has passed through many difficult phases in history. The bottom line is that inequalities, racism and disrespect for the rule of law will continue to fuel public rage which might even take violent forms” ASCAB said adding that workers all over the world and their unions have a crucial role to play in bringing an end to all forms of discrimination including race.