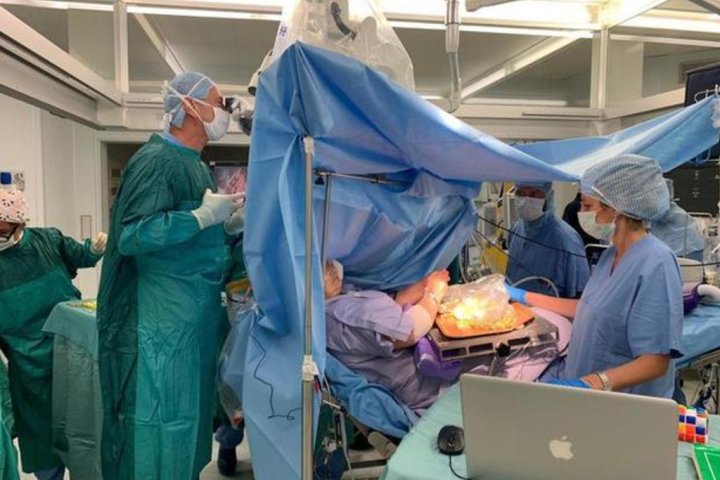 A 60-year-old woman with a brain tumour stuffed olives while receiving brain surgery at Ospedali Riuniti, a hospital in Italy’s Marche region.

In an incredible photo of the surgery shared by the hospital, the woman can be seen sitting in front of a bag of olives as neurosurgeon Dr. Roberto Trignani worked on her brain.

While it may seem like an anomaly, Trignani has performed approximately 60 similar operations — during which patients perform an activity — in the last five years, CBS News reports.

“This allows us to monitor the patient while we are intervening on brain functions, and to calibrate our action,” he said.

The activities aren’t chosen at random. They are selected based on the part of the brain being operated on.

“It all went very well,” the surgeon told Italian publication Ansa after the two-and-a-half-hour surgery was complete.

He successfully removed a tumour from the woman’s left temporal lobe, the area that controls speech and movement on the left side of the body, the publication says.

The woman was able to stuff 90 olives during that time, Italian publication Ascoli reports.

Awake brain surgery, per the Mayo Clinic, greatly reduces the risk of damaging critical brain areas that control speech and other skills.

Earlier this year, a British woman went under the knife at King’s College Hospital to have a dangerous tumour removed from her brain.

Throughout the operation, Dagmar Turner, 53, played the violin. One wrong move by doctors might have cost Turner 40 years of violin practice, robbing her of the dexterity needed to play the instrument.