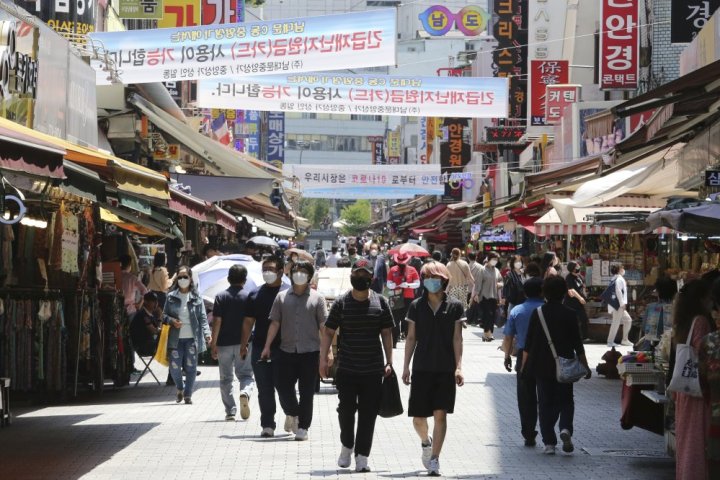 But a resurgence of infections in the Seoul region where half of South Korea’s 51 million people live is threatening the country’s success story and prompting health authorities to warn that action must be taken now to stop a second wave.

South Korea’s Centers for Disease Control and Prevention on Thursday reported 45 new cases, a daily rise that has been fairly consistent since late May. Most have been in the Seoul metropolitan area, where health authorities have struggled to trace transmissions.

“Considering the quick transmission of COVID-19, there’s limits to what we can do with contact tracing alone to slow the spread,” said Yoon Taeho, a senior Health Ministry official during a virus briefing on Thursday, where he repeated a plea for residents in the capital area to stay at home.

Despite the concerns over the spike in infections, government officials have so far resisted calls to reimpose stronger social distancing guidelines after they were relaxed in April, citing concerns over hurting a fragile economy.

Their stance seems in contrast with the urgency conveyed by health experts, including KCDC director Jung Eun-kyeong, who has warned that the country could be sleepwalking into another huge COVID-19 crisis, but this time in its most populous region.

You should also READ  Can dogs detect COVID-19? U.K. researchers are studying if they can pick up the scent

She has said health workers are struggling more and more to track transmissions that are spreading quickly and unpredictably as people increase their activities and practice less social distancing.

Jung’s concerns were echoed by Kwon Jun-wook, director of the National Institute of Health, who in a separate briefing on Thursday acknowledged that health authorities were only managing to “chase transmissions after belatedly discovering them.”

While South Korea saw a much larger surge of infections in February and March, when hundreds of new cases were reported every day, those had been easier to track. The majority then were concentrated in a single church congregation in Daegu, South Korea’s fourth-largest city with 2.5 million people.

The recent clusters have popped up just about everywhere around the capital.

At least 146 cases have been linked to workers at a large warehouse operated by local e-commerce giant Coupang, which has been accused of failing to implement preventive measures and having employees work even when sick.

EU to ease COVID-19 ban on nonessential travel from July 1, with some exemptions