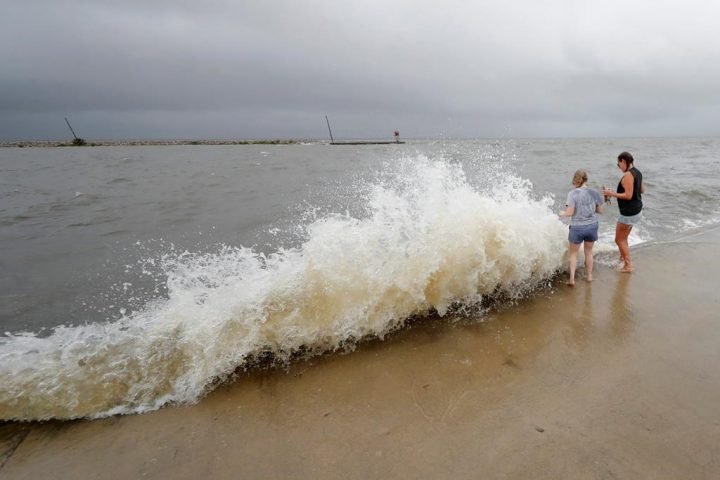 Severe thunderstorms accompanied by winds approaching 70 mph battered lower Michigan late Wednesday as the remnants of Tropical Storm Cristobal moved out of the Midwest and into Canada.

Cristobal ended a trek from the Gulf of Mexico up through the midsection of the U.S. that caused flooding across the region, downed trees and power lines and damaged homes and businesses in Indiana, Wisconsin, Missouri and Iowa.

By Wednesday evening, about 2 inches of rain had fallen on Midland, Michigan, where the threat of flooding was enhanced by the failure last month of two dams along the Tittabawassee River following days of heavy rains. There were no early reports of flooding or damage.

A church roof was peeled away in southeastern Michigan’s Sanilac County. In Detroit, dark clouds unleashed a downpour before briefly yielding to sun in early evening, which was followed by another round of rain accompanied by strong winds and hail.

About 430,000 customers of the state’s electric utilities, Jackson, Michigan-based Consumers Energy and Detroit-based DTE Energy, were reported to be without power late Wednesday.

A line of thunderstorms pushed through Ottawa County in western Michigan on Wednesday morning. The city of Holland along Lake Michigan activated storm warning sirens as winds reached speeds of 70 mph, according to the county’s emergency management office.

Power lines and trees were reported down in Holland and other cities.

The weather service issued a gale warning through Wednesday evening on Lake Michigan because of the possibility of strong winds creating waves of 6 to 10 feet (1.8 to 3.1 metres). Forecasters warned boaters, swimmers and paddlers to stay out of the water.

Hail reported as 2 inches (5 centimetres) in diameter shattered a vehicle’s windshield in western Indiana’s Dyer, according to the Chicago Tribune.

“Also, in that area, they got 2.13 inches (5.4 centimetres) of rain in 30 minutes,” meteorologist Ricky Castro said. “The hail report of 2 inches was windblown hail but the winds were probably near or over 60 mph (96 kph) along with the hail. The storm was quite as intense at that point.”

The Indiana Department of Transportation reported some lanes of Interstate 80/94 in Hammond were flooded after that rain.

Storms moving ahead of a cold front also caused flash flooding in and around New Orleans and prompted the closure of a section of intestate highway. The state highway department said a portion of westbound Interstate 610 in New Orleans was shut down due to high water.