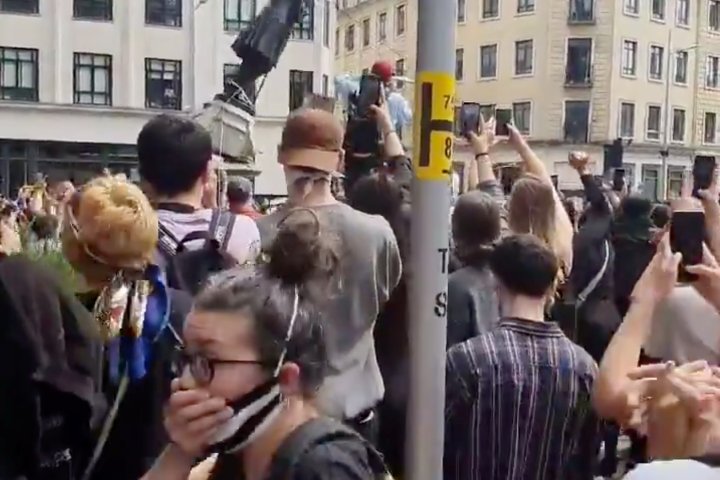 The toppling of the statue of slave trader Edward Colston in Bristol, England, was a moment made for social media.

The violent thud of the bronze monument onto the ground, followed by protesters symbolically kneeling on its neck and throwing it into Bristol Harbour made for a powerful piece of Twitter video.

British TV presenter Piers Morgan compared it to the felling of the statue of Saddam Hussein in Baghdad in 2003, but beneath the surface, the events have a distinct difference.

Hussein’s statue was only erected a year before it fell, and its demise was ultimately almost meaningless in the context of the disastrous war that followed.

Colston’s statue had stood in the centre of the former slave port of the Bristol for 125 years — a city with a significant Afro-Caribbean population.

For years, campaigners had asked for it to be removed or for the plaque at its base to acknowledge Colston’s slave business.

For Black Bristolians, the toppling of Colston’s statue was hugely symbolic.

For Britain in general, the dumping of Colston into Bristol Harbour is already proving to be a turning point in a country whose prominent global profile is built on riches amassed during its colonial history.

Within two days, a London borough council removed the statue of 18th-century slave trader Robert Milligan from a plinth outside the Museum of London Docklands.

London Mayor Sadiq Khan launched a diversity commission to see which other statues might be removed and how they could be replaced with monuments that better represent and respect the city’s racial diversity.

And in the Scottish capital of Edinburgh, the city council said a new plaque will finally be installed at the base of the statue of Henry Dundas, 1st Viscount Melville.

The name of the powerful politician — who helped delay the end of Britain’s slave trade — is familiar to many Canadians.