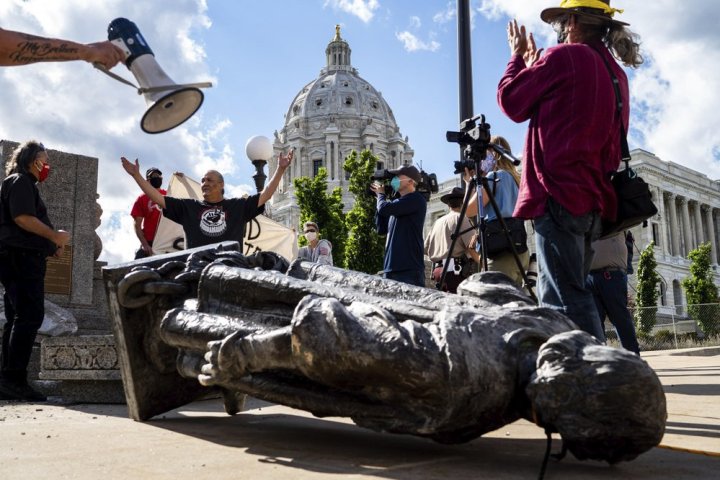 The rapidly unfolding movement to pull down Confederate monuments around the U.S. in the wake of George Floyd’s death has extended to statues of slave traders, imperialists, conquerors and explorers around the world, including Christopher Columbus, Cecil Rhodes and Belgium’s King Leopold II.

Protests and, in some cases, acts of vandalism have taken place in such cities as Boston; New York; Paris; Brussels; and Oxford, England, in an intense re-examination of racial injustices over the centuries. Scholars are divided over whether the campaign amounts to erasing history or updating it.

At the University of Oxford, protesters have stepped up their longtime push to remove a statue of Rhodes, the Victorian imperialist who served as prime minister of the Cape Colony in southern Africa. He made a fortune from gold and diamonds on the backs of miners who labored in brutal conditions.

Oxford’s vice chancellor Louise Richardson, in an interview with the BBC, balked at the idea.

“We need to confront our past,” she said. “My own view on this is that hiding our history is not the route to enlightenment.”

Near Santa Fe, New Mexico, activists are calling for the removal of a statue of Don Juan de Oñate, a 16th-century Spanish conquistador revered as a Hispanic founding father and reviled for brutality against Native Americans, including an order to cut off the feet of two dozen people. Vandals sawed off the statue’s right foot in the 1990s.

You should also READ  Air Canada has more refund complaints in U.S. than any other foreign airline

In Bristol, England, demonstrators over the weekend toppled a statue of 17th-century slave trader Edward Colston and threw it in the harbor. City authorities said it will be put in a museum.

Across Belgium, statues of Leopold II have been defaced in half a dozen cities because of the king’s brutal rule over the Congo, where more than a century ago he forced multitudes into slavery to extract rubber, ivory and other resources for his own profit. Experts say he left as many as 10 million dead.

“The Germans would not get it into their head to erect statues of Hitler and cheer them,” said Mireille-Tsheusi Robert, an activist in Congo who wants Leopold statues removed from Belgian cities. “For us, Leopold has committed a genocide.”

In the U.S., Floyd’s death May 25 under the knee of a white Minneapolis police officer has led to an all-out effort to remove symbols of the Confederacy and slavery.

The Navy, the Marines and NASCAR have embraced bans on the display of the Confederate flag, and statues of rebel heroes across the South have been vandalized or taken down, either by protesters or local authorities.

On Wednesday night, protesters pulled down a century-old statue of Confederate President Jefferson Davis in Richmond, Virginia, the former capital of the Confederacy. The 8-foot (2.4-meter) bronze figure had already been targeted for removal by city leaders, but the crowd took matters into its own hands. No immediate arrests were made.