Trump campaign takes no responsibility if MAGA rally-goers get coronavirus 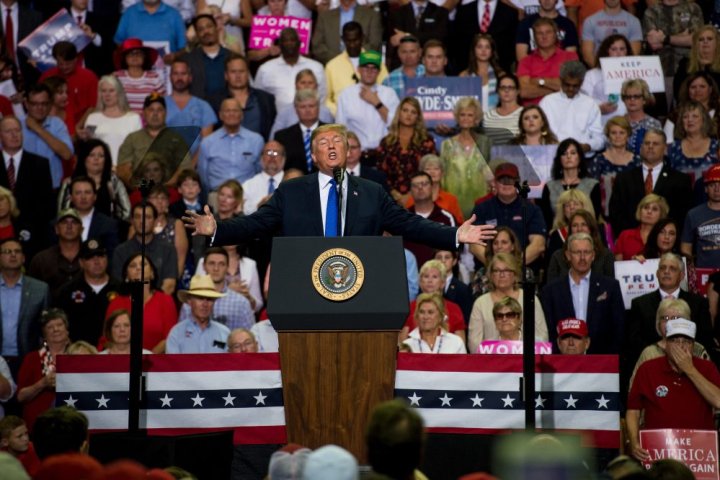 U.S. President Donald Trump will pack thousands of loyal supporters into an arena in Tulsa, Okla., next week for his first rally since the coronavirus lockdowns started — and if any attendees get COVID-19 from the experience, well, that’s their problem.

Anyone who registers for the Trump rally on June 19 must waive the right to sue the president’s campaign or the venue if they later test positive for the virus, according to the rally event page. The Bok Center venue has a capacity of about 19,000 people.

“By clicking register below, you are acknowledging that an inherent risk of exposure to COVID-19 exists in any public place where people are present,” the disclaimer on Trump’s campaign website says. “By attending the Rally, you and any guests voluntarily assume all risks related to COVID-19 and agree not to hold Donald J. Trump for President, Inc.; BOK Center; ASM Global; or any of their affiliates, directors, officers, employees, agents, contractors, or volunteers liable for any illness or injury.”

The Trump campaign added the coronavirus disclaimer despite repeated claims from the president that the worst is over, and a strong push from the White House to re-open the U.S. economy. It also comes after the U.S. surpassed 2 million cases of COVID-19 this week, and with the death toll at more than 115,000 American lives.

Trump hasn’t tweeted about the virus since May, when he mourned 100,000 deaths from the virus while applauding himself for things he did in January.

“One person lost to this invisible virus is too much, it should have been stopped at its source, China, but I acted very quickly, and made the right decisions,” he tweeted.

Trump’s return rally in Oklahoma will be held on a date and in a place with strong significance for members of the African-American community, many of whom he’s angered with his response to the death of George Floyd in recent weeks. The rally itself will be in Tulsa, the site of the Tulsa massacre, where white locals murdered dozens of black people in a racially motivated riot between May 31 and June 1, 1921. The rally is scheduled for June 19, a day known as Juneteenth and commemorated as the date when slavery ended in the U.S.

Trump’s last campaign rally was on March 2 in Charlotte, N.C. — a state that irked him recently after it refused to let him hold the Republican National Convention there without coronavirus protections. Trump has now split plans for the convention so that he can accept the GOP’s nomination for president in Jacksonville, Fla., with a crowd of supporters present to applaud him.

Data from the Associated Press shows coronavirus cases are surging in nearly half of all states, even as the country moves to re-open from lockdowns meant to prevent the spread. Arizona hospitals have been told to brace for a large influx of cases, Texas has more COVID-19 patients in hospital than ever before and North Carolina is rethinking its post-lockdown plans amid a local spike.

You should also READ  Coronavirus: New York bans gatherings of more than 500 — including on Broadway

The stock market — which Trump has often tied to his re-election fortunes — dropped sharply on Thursday amid concerns about a second wave of the virus.