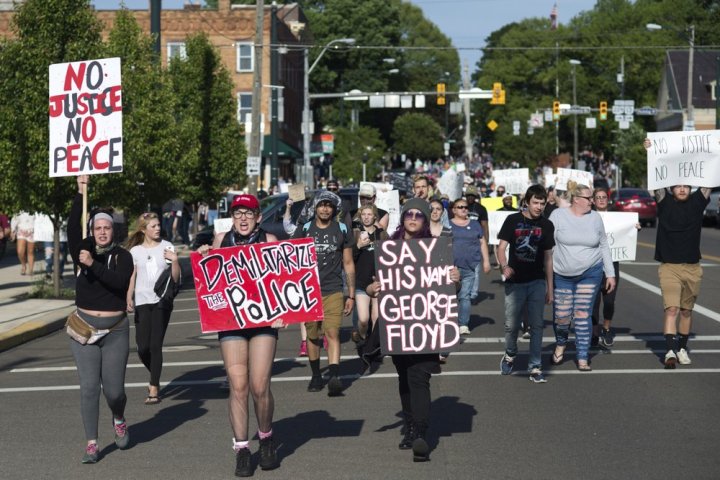 In the lake country 200 miles (320 kilometers) northwest of Detroit, hundreds danced, prayed and demanded racial justice in Cadillac, a Michigan town that was long home to a neo-Nazi group.

It was not an isolated scene. In eastern Ohio, even more demonstrated in rural Mount Vernon, a town with its own current of racial intolerance, just as others did in Manheim, Pennsylvania, a tiny farming town in Lancaster County, with its small but active Ku Klux Klan presence.

The protest movement over Black injustice has quickly spread deep into predominantly white, small-town America, notably throughout parts of the country that delivered the presidency for Donald Trump. Across Michigan, Ohio, Pennsylvania and Wisconsin, more than 200 such demonstrations have taken place, many in cities with fewer than 20,000 residents, according to local media, organizers, participants and the online tracking tool CrowdCount.

“That’s what’s so striking, that these protests are taking place in rural places with a white nationalist presence,” said Lynn Tramonte, who grew up near Mount Vernon and is monitoring the Black Lives Matter demonstrations around Ohio.

The protests in these Republican-leaning areas offer a test of the president’s ability to reassemble his older, white voting bloc. If he cannot replicate that coalition, it would leave Trump with few options, especially since he continues to lose support in suburbs.

“If President Trump cannot hold onto white, working-class voters in rural, small-town Michigan, Pennsylvania, Wisconsin and Ohio, I don’t know how he wins the election,” said Terry Madonna, director of the Center for Public Affairs at Franklin & Marshall College, in Lancaster, Pennsylvania. “Can you rule out he won’t have that same level of enthusiasm? No, you can’t.”

Trump carried Pennsylvania by about 44,000 votes in 2016, in part with overwhelming support from a patchwork of rural, white counties.

The pattern also played out in Michigan and Wisconsin, where he won by even fewer votes. In Ohio, that coalition propelled him to an easy victory.

Trump’s reelection campaign is working chiefly through online outreach to hold onto his largely white base and to identify new voters in rural areas as a defense against inroads by presumptive Democratic nominee Joe Biden.

Some polls suggest that, while white voters without college degrees are still a strong group for Trump, they could be more open to supporting Biden than they were to supporting Democrat Hillary Clinton four years ago.

Trump campaign spokesman Tim Murtaugh did not directly address the protests taking place in counties won by the president, but said more generally in a statement to The Associated Press, “President Trump expressed disgust and shock over what happened to George Floyd and praised the peaceful demonstrations, but also knows that Americans cannot live with riots and lawlessness in cities nationwide.”

But the pace of change over racial justice after Floyd’s death last month by police in Minneapolis has quickened and has sparked protests in hundreds of communities in every state, on a scale rarely, if ever, seen before. It is not that Biden will necessarily win rural counties that Trump carried easily, but he may be able to cut into Trump’s margins enough to bring those states back to the Democratic column.