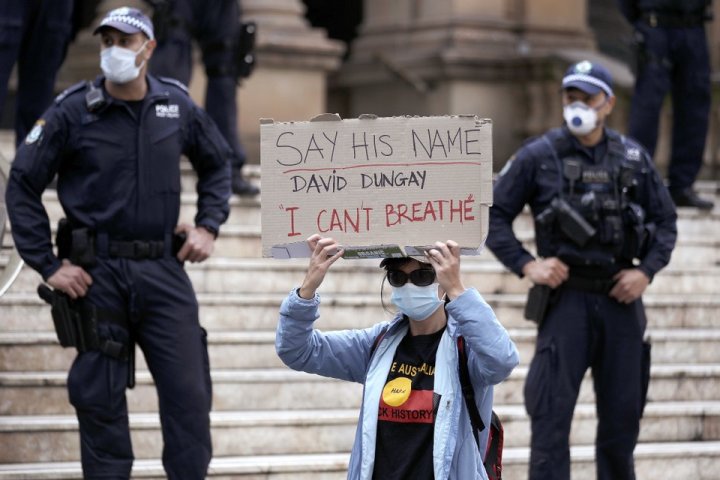 Protests went ahead in support of the Black Lives Matter movement in far-flung parts of Australia on Saturday against the advice of government and health authorities but on a significantly smaller scale than the previous weekend, when tens of thousands rallied in cities along the east coast.

The biggest demonstration was in Perth, the Western Australia state capital, where the Australian Broadcasting Corp. estimated that 5,000 people gathered to honour George Floyd and remember indigenous Australian people who have died while in custody.

Floyd, a Black man, died in handcuffs on May 25 while a white Minneapolis police officer pressed a knee on his neck. His death has prompted weeks of protests in the U.S. and around the world with the same theme: Black Lives Matter.

The threat of rain and and lack of a city council permit meant the Perth rally didn’t reach the expected 8,000-15,000 people organizers had hoped would attend.

Hannah McGlade, a human rights lawyer and activist, called for an independent investigation into indigenous deaths in custody and rejected calls from politicians for people not to gather for the protests.

Western Australia state Premier Mark McGowan had urged organizers to postpone the event, saying “this is about trying to save people’s lives.”

You should also READ  Canadians stranded in South Africa by COVID-19 could pay $5K for trip home: government

A man in his 30s who attended the rally in Melbourne last weekend later tested positive for the coronavirus, heightening concerns about a potential second wave in Australia just as the federal and state governments are easing restrictions.

The nationwide day of protests started in the far north, with more than 1,000 people gathering in City Park in Darwin, which has the highest proportion of Aboriginal people of Australia’s state capitals.

Police in the North Territory issued a statement saying the event was peaceful “and allowed community members to express their views in a safe environment.”

Sharna Alley, one of the Darwin protest organizers, told the crowd in comments broadcast by Sky News Australia: “We’re tired of the injustices. We’re tired of the brutality against our people in so-called protective custody. We really want to know, when will it stop.’