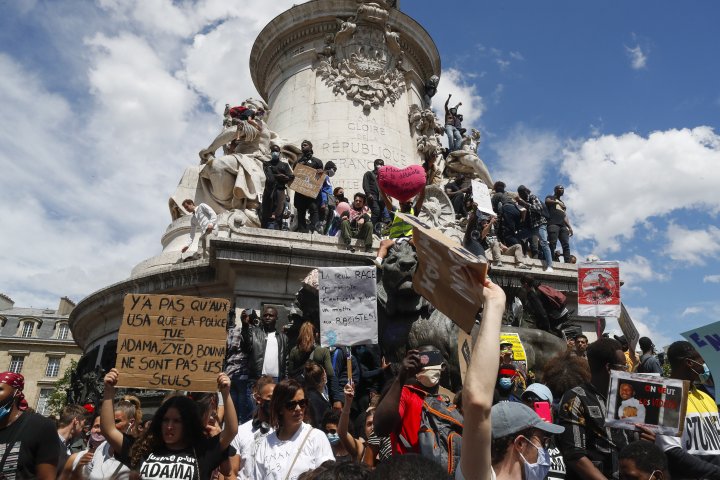 Paris riot police fired tear gas Saturday to disperse a largely peaceful but unauthorized protest of police brutality and entrenched racism, as France’s minorities increasingly push back against a national doctrine of colourblindness that has failed to eradicate discrimination.

In London, far-right activists and soccer rowdies scuffled with police while trying to “guard” historical monuments that have been targeted recently by anti-racism protesters for their links to slavery and British colonialism.

The events in the two European capitals reflected the global emotion unleashed by the death of George Floyd in the United States and the ensuing reckoning with racial injustice and historical wrongs. In both cities, protesters defied restrictions on public gatherings imposed to prevent the spread of the coronavirus.

Myriam Boicoulin, 31, who was born in the French Caribbean island of Martinique, said she marched in Paris on Saturday because she “wants to be heard.”

“The fact of being visible is enormous,” Boicoulin said. As a black woman living in mainland France, she said, “I’m constantly obliged to adapt, to make compromises, not make waves _ to be almost white, in fact.”

“It’s the first time people see us,” she told The Associated Press. “Let us breathe.”

The Paris march in Paris was led by supporters of Adama Traore, a French black man who died in police custody in 2016 in circumstances that remain unclear despite four years of back-and-forth autopsies. No one has been charged in the case.

“We are are all demanding the same thing — fair justice for everyone,” Traore’s sister Assa told the rally.

Angry shouts rose from the racially diverse crowd as a small group of white extreme-right activists climbed a building overlooking the protest and unfurled a huge banner denouncing “anti-white racism.”

Building residents then reached out of their windows and tore part of the banner down, one raising his fist in victory. Officers prevented people attending the main rally from approaching the counter-demonstrators, but didn’t detain the far-right activists until two hours later, further angering the crowd below.

Riot police then fired tear gas and charged unruly members of the main protest, urging them to disperse. The crowd initially planned to march through the city, but police decided to block them from moving, citing coronavirus concerns.

Similar protests were also held Saturday in cities around France, from Rouen in Normandy in the northwest to Marseille on the Mediterranean.