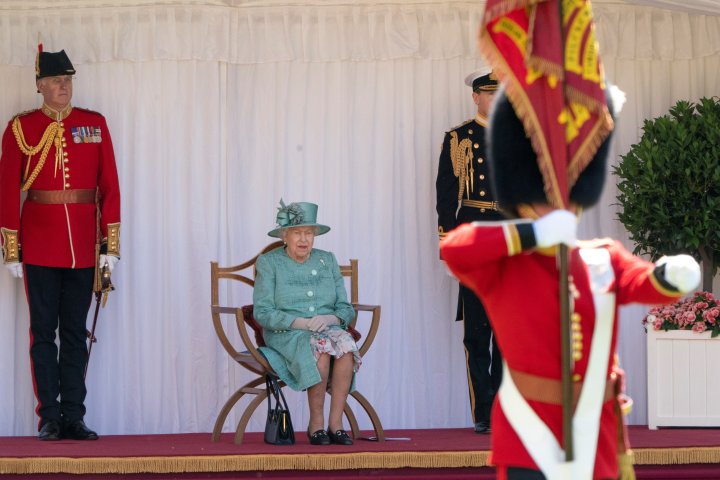 Queen Elizabeth viewed a socially-distanced military ceremony at Windsor Castle to mark her official birthday on Saturday, after the coronavirus pandemic forced cancellation of the usual large parade of soldiers through central London.

It was the queen’s first official public appearance since the country went into lockdown in late March.

The 94-year-old queen watched a series of drills by the 1st Battalion Welsh Guards in the castle’s quadrangle, instead of the Trooping the Colour event that traditionally marks the occasion.

The queen, who has been living with her 99-year-old husband Prince Philip at the castle west of London, has issued a number of rallying messages to the nation in the past three months, including televised addresses that have been a rarity during her 68-year reign.

But she had not been seen in public until Saturday, when dressed in a jade coat and wearing a diamond Welsh Guards brooch, she observed soldiers adhering to the 2-meter social distancing rule, and listened to music performed by a Band of the Household Division.

Earlier this week, Buckingham Palace released a new photograph of the royal couple to celebrate Philip’s birthday. The gun salutes in London that normally celebrate that occasion were also canceled.