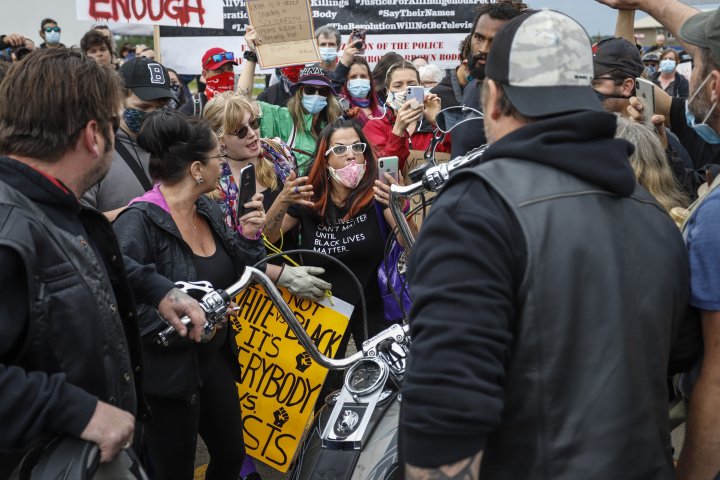 There was some friction and angry words but a Black Lives Matter rally in central Alberta Saturday remained largely peaceful.

The protest in Innisfail, Alta., was initially called off after an onslaught of online bigotry, but the community of 8,000 north of Calgary decided to embrace the rally and more than 300 people showed up to support the Black Lives Matter movement.

One of the speakers at the event, Calgary activist Audora Nwofor, told journalists and Innisfail Mayor Jim Romane that the community doesn’t deserve any credit for hosting the event.

“I’m not giving out cookies for a one-afternoon event. To have a one-day event, I don’t think you deserve credit for that,” she said.

“If you want to make a change, you listen to Black people with humility. You go and educate yourselves and then you support Black people in everything we do whether it’s messy or not.”

But Dieulita Datus, who is Black and grew up in nearby Lacombe, said she believes Innisfail deserves a lot of credit.

“It gives me hope for the future and the fact people are here, whether they’re protesters or counter-protesters — the fact that people showed up means that they want to add their voice to the conversation.”

A handful of individuals were drowned out when they attempted to chant “White Lives Matter,” while a man in a lawn chair was holding a sign that read “What about all lives matter no matter what colour you are.”

At the end of the rally the BLM protesters surrounded some of their opponents yelling “You aren’t welcome here.”

Protests were organized across the United States and around the world following the death of George Floyd, a Black man in Minneapolis who died while a police officer pressed a knee into his neck for nearly nine minutes.

The protests are calling for an end to systemic racism and police brutality.

Innisfail’s mayor said he regrets making the comment that “all lives matter” when initially talking about the proposed rally.