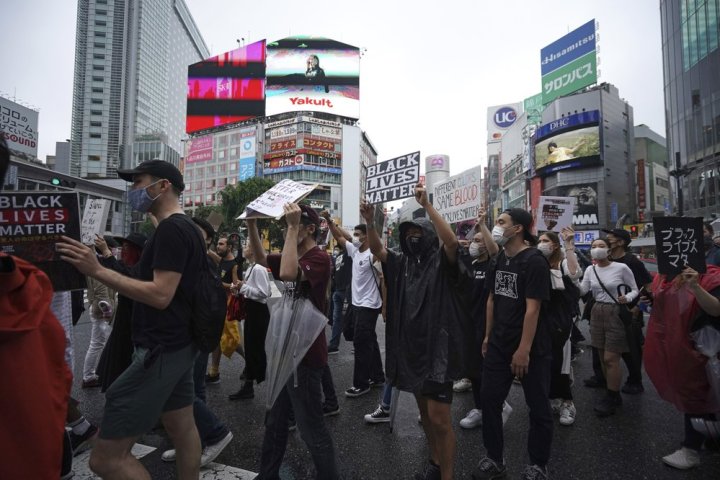 Holding handmade signs that read “Black Lives Matter,” several hundred people marched peacefully at a Tokyo park Sunday, highlighting the outrage over the death of George Floyd even in a country often perceived as homogeneous and untouched by racial issues.

Mitsuaki Shidara, standing in the crowd at Yoyogi Park, said Japan has plenty of discrimination problems, but they’re overlooked.

“We are all human first, but we are divided by nationality, gender, religion, skin colour,” he said, wearing a pendant with the Japanese character for “love,” which he said was his favourite word.

“What’s happening in the U.S. shows racism is going on, even after 400 years,” said Shidara, who works for a food maker.

Mio Kosaka, another participant, said she had been a victim of discrimination at times while growing up in Beijing and Tokyo, because her parents were Japanese and Chinese.

“I think it is so wrong to discriminate based on appearance, and I wanted to relay the message that the American people have allies in Japan,” said Kosaka, who is studying design at a U.S. college.

“Some people don’t even know there is discrimination. Awareness needs to be raised,” she added.

Protests have continued across the U.S. but also in Europe, including Belgium, Germany and Britain, as well as Australia, where people have been confronting racism and demanding change.

The demonstrators were pushed into action by the May 25 death of Floyd, a Black man who said he could not breathe as a white Minneapolis police officer pushed his knee against his neck for nearly 9 minutes.

In New Zealand, thousands protested in Auckland and Wellington on Sunday. The Auckland protest began at the central Aotea Square and ended at the U.S. Consulate, where people took a knee and observed a minute of silence for Floyd.

“When George Floyd took his last breath, it allowed the rest of us to breathe,” social activist Julia Whaipooti told the crowd, according to the news organization Stuff.

Whaipooti said that while New Zealanders were showing solidarity with people in the U.S., highlighting discrimination at home was critical.