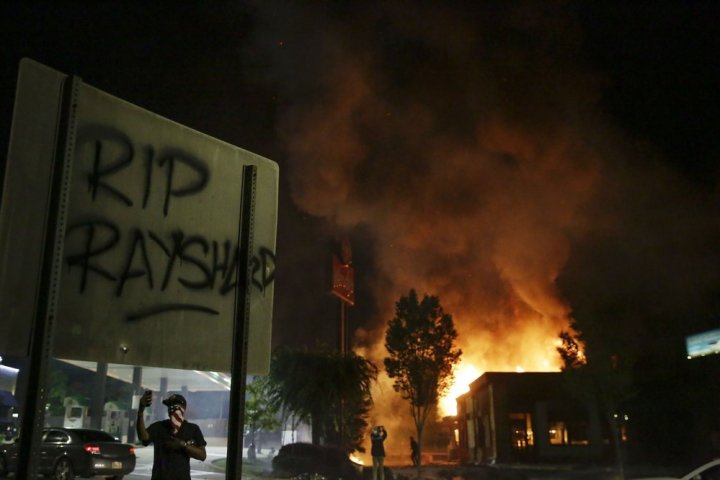 Police in Atlanta offered a $10,000 reward and published photos of what appeared to be a masked white woman as they sought the people who burned down a Wendy’s restaurant where a black man was fatally shot by an officer as he tried to escape arrest.

The fast-food outlet was torched late on Saturday during demonstrations that erupted over the killing of 27-year-old Rayshard Brooks.

His death on Friday came against a backdrop of nationwide and international protests against racial injustice and brutality by law enforcement following the May 25 death of George Floyd, an African-American man, in Minneapolis police custody.

Atlanta’s police chief, Erika Shields, resigned over the shooting. The officer suspected of killing Brooks was fired, and another officer involved in the incident was put on administrative leave. Both the officers are white.

Brooks’ death was captured on police body camera footage, as well as by a surveillance camera.

As demonstrators in Atlanta took to the streets and chanted for the officers in Brooks’ case to be criminally charged, at one point late on Saturday blocking traffic on a nearby interstate highway, the Wendy’s restaurant went up in flames.

Police said they were seeking those responsible for the blaze, including a woman who was “attempting to hide her identity.” The department posted photos on social media of what looked to be a young white woman wearing a black baseball cap and face mask, and a video clip filmed by a protester that appeared to show a woman encouraging the flames.

You should also READ  ‘The chill is real’: Canada’s new ambassador to China says of current relationship

“Look at the white girl trying to burn down the Wendy’s,” the man recording the video can heard saying. “This wasn’t us.”

Mayor Keisha Lance Bottoms said on Saturday that she did not believe the shooting was a justified use of deadly force.

Police were called to the Wendy’s after reports Brooks had fallen asleep in his car and was blocking the drive-thru line, and tried to take him into custody after he failed a field sobriety test, according to the Georgia Bureau of Investigation.

Body camera footage showed Brooks struggling with officers on the ground before breaking free and running across the parking lot holding what appears to be a police Taser. A second videotape from the restaurant’s cameras shows Brooks turning as he runs and possibly aiming the Taser at the pursuing officers before one of them fires his gun and Brooks falls.

Lawyers for Brooks’ family said he was the father of a young daughter who was celebrating her birthday on Saturday. They said the officers had no right to use deadly force even if he had fired the Taser, a non-lethal weapon, in their direction.