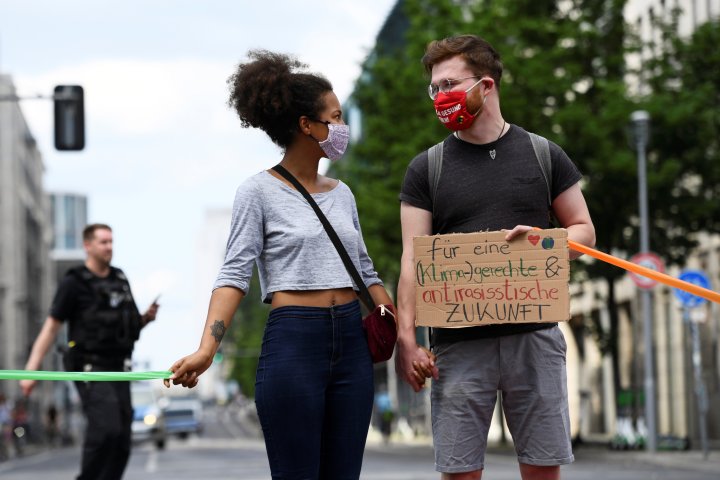 Thousands of people formed a human chain through Berlin on Sunday in a message against racism, discrimination and social inequality among other causes.

Organizers of Sunday’s “Indivisible” demonstration, who planned a nine-kilometre chain from the Brandenburg Gate southeast to the Neukoelln neighbourhood, were told to require participants to wear masks. Protesters also were asked to keep well apart.

They were linked by coloured ribbons, forming what organizers called a “ribbon of solidarity.” People appeared to keep to the hygiene restrictions during the event, which lasted a bit over an hour.

Police put the number of participants at about 5,000, while organizers estimated it at over 20,000. There were smaller demonstrations in other German cities.

Berlin recently lifted coronavirus-related limits on the number of people who can attend demonstrations, though people are still required to keep at least 1.5 metres apart in public.

Last weekend, at least 15,000 people attended an anti-racism protest, in some cases closely packed together. That prompted criticism from officials, although they expressed understanding for the cause.

It was one of many demonstrations worldwide in the aftermath of the May 25 death of George Floyd, a black man, who died after a white Minneapolis police officer pressed a knee to his neck.