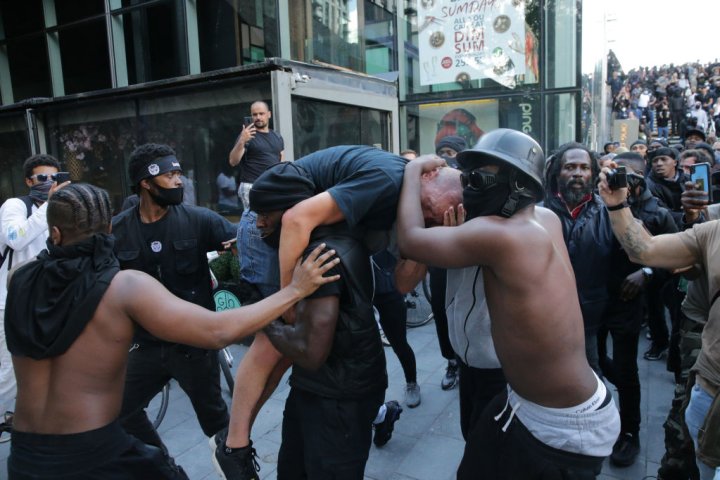 One man has given new meaning to the phrase “a picture is worth a thousand words.”

During the Black Lives Matter (BLM) protests on Saturday in London, spurred by the death of George Floyd, a Black man was seen carrying an injured white man to safety after he was beaten up.

It’s alleged that the injured man was a counter-protester. Far-right activists organized a counter-protest to the BLM groups that day and were clashing with the protesters, according to The Guardian.

In the powerful photos, Patrick Hutchinson has the man over his shoulder as he walks him to safety. Hutchinson told the BBC it “wasn’t going to end well” without his intervention, and he did what he had to do.

Hutchinson first spotted the man huddled in the fetal position on a set of stairs. He quickly picked the man up in a “fireman’s carry” and others formed a barrier around them while they walked to safety.

“I am carrying him, my friends are protecting myself and the man on my shoulder. He was still receiving blows, you can feel people trying to hit him,” he told CNN. “There were people trying to protect him at the same time, carried him over to the police and I said, ‘Here you are.’ One of them said ‘thank you — you did a good thing there.’”

“My real focus was on avoiding a catastrophe… all of a sudden, the narrative changes into ‘Black Lives Matter, Youngsters Kill Protesters.’ That was the message we were trying to avoid.”

“His life was under threat, so I just went under, scooped him up, put him on my shoulders and started marching towards the police with him,” he told Channel 4 News.

“You don’t think about it (being scary) at the time. You just do what you’ve got to do.”

Hutchinson, a personal trainer and a grandfather, went to the London protests with a group of four of his friends. Their aim was to protect young Black Lives Matter protesters from getting caught up in the violence, he told the news channel.

“At the moment the scales are unfairly balanced and I just want things to be fair,” he said. “For my children and my grandchildren.”

The as-yet-unidentified man being carried had injuries to his face, Reuters reports. It was unable to verify what his political leanings are.