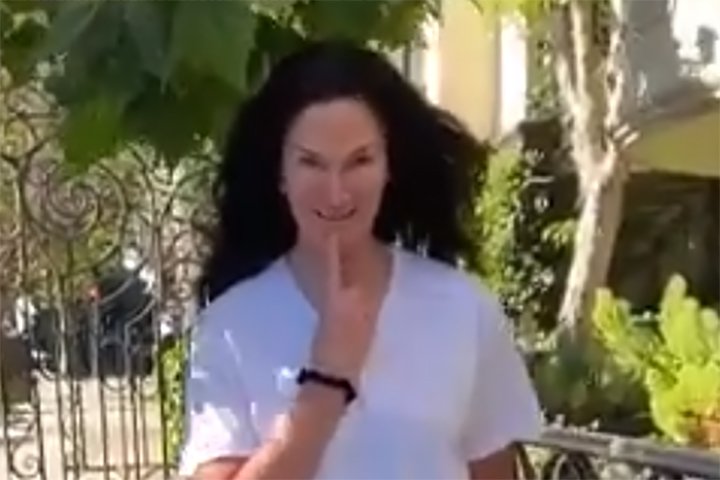 A California woman and cosmetics CEO claims she’s learned a valuable lesson about racism and white privilege after being described as the latest “Karen” to call police on an innocent person of colour in San Francisco.

Lisa Alexander, CEO of LAFACE Skin Care, and investment banker Robert Larkins have both apologized for the now-viral video, which shows them confronting James Juanillo outside his home last week in an incident widely condemned as racist.

Juanillo, who is Filipino, recorded the video outside his house, where he was stencilling “Black Lives Matter” in chalk on his own retaining wall. The video shows a white couple, who identify themselves as “Lisa” and “Robert,” questioning Juanillo about his actions on “private property.” They claim to know who lives in his home and vow to report him to police when he refuses to answer their questions.

“A white couple call the police on me, a person of colour, for stenciling a #BLM chalk message on my own front retaining wall,” Juanillo wrote in a tweet with the video last Friday, which has been watched more than 15 million times.

Juanillo also referred to Alexander as a “Karen” — a shorthand for white women who bring their trivial complaints to people in power (i.e. “I’d like to speak to the manager”). The term has often been used in recent months for white women who falsely report people of colour to police, such as in the case of Amy Cooper, who falsely claimed a Black birdwatcher was threatening her in Central Park.

You should also READ  Where did they go? Millions fled Wuhan, China before coronavirus lockdown

Cooper was ultimately fired from a lucrative investment job after her target, Christian Cooper, recorded the video and shared it online. The incident triggered intense backlash just a few days before George Floyd died in police custody in Minneapolis, Minn.

Juanillo’s two-minute video shows Alexander and Larkins treating him as though he were a vandal. Alexander speaks in a calm voice with a broad smile on her face throughout the video while Larkins stands at a distance, seemingly filming on his phone.

Juanillo doesn’t give her an answer and instead wants to know why she’s asking.

“Are you defacing private property?” Larkins says from a distance. “You’re free to express your opinions, just not on people’s property.”

Alexander then says: “We’re just saying, absolutely, your signs and everything, that’s good, but this is not the way to do it. It’s private property.”