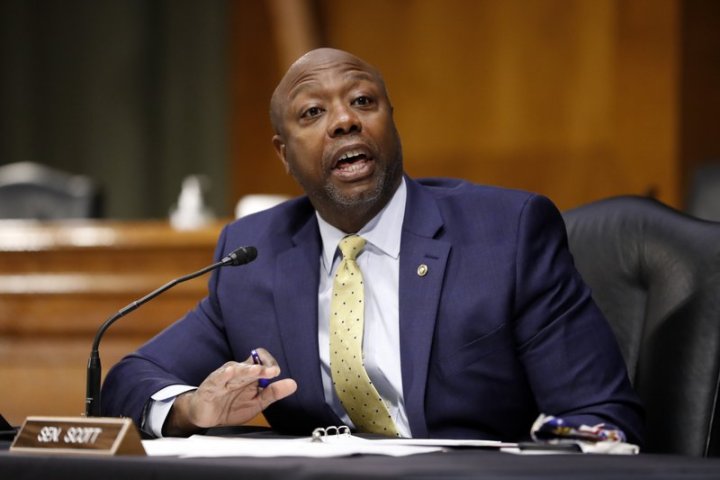 Driven by a rare urgency, Senate Republicans are poised to unveil an extensive package of policing changes that includes new restrictions on police chokeholds and other practices as President Donald Trump signals his support following the mass demonstrations over the deaths of George Floyd and other Black Americans.

Sen. Tim Scott of South Carolina, the sole African American Republican in the Senate, has been crafting the package set to roll out Wednesday. While it doesn’t go as far as a sweeping Democratic bill heading toward a House vote, the emerging GOP legislation shares similar provisions as Congress rushes to respond.

With Trump set to announce executive actions on law enforcement as soon as Tuesday, the crush of activity shows how quickly police violence and racial prejudice are transforming national party priorities.

“I think we’re going to get to a bill that actually becomes law,” Scott said Sunday on NBC’s “Meet the Press.” Scott said the chokehold, in particular, “is a policy whose time has come and gone.”

The GOP package is one of the most extensive proposed overhauls to policing procedures yet from Republicans, who have long aligned with Trump’s “law and order” approach but are suddenly confronted with a groundswell of public unrest in cities large and small over police violence.

Over the weekend, the shooting death of Rayshard Brooks during a routine stop by a white officer in Atlanta led to an outcry, more protests and the police chief’s swift ouster.

The Republican bill would create a national database of police use-of-force incidents, encourage police body cameras and include a long-stalled effort to make lynching a federal hate crime.

Additionally, the GOP package is expected to restrict the use of chokeholds by withholding certain federal funds to jurisdictions that continue to allow the practice, according a Senate Republican unauthorized to discuss the pending bill and granted anonymity.

Democrats have said the GOP package doesn’t go far enough in the aftermath of Floyd’s death and the outpouring of protests and Black Lives Matter demonstrations over the number of Black Americans killed at the hands of law enforcement.

In particular, the Republican bill does not address the issue of “qualified immunity,” as the Democrats’ bill does, which aims to enable those injured by law enforcement personnel to sue for damages. The White House has said that is a line too far. As an alternative, Scott has suggested a “decertification” process for officers involved in misconduct.

“This is not a time for lowest common denominator, watered-down reforms,” said Sen. Cory Booker, D-N.J., a co-author of the Democratic bill, on CBS’s “Face the Nation.” “It’s a time to stop the problem.”

Yet Democrats signalled a willingness to look at the Republican approach for areas of common ground.