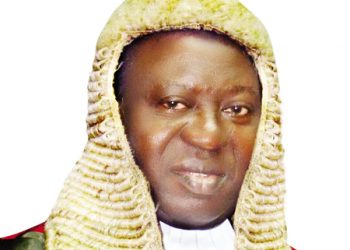 Nigerian police on Tuesday arraigned two highbrow armed robbers, Friday Eze, and Anuoluwa Adebare that specializes in operating in highbrow areas like Ikoyi, and its environ.

They were arraigned before a Federal High Court, Lagos for breaking into the Ikoyi home of a Lagos judge, carting away $1,000, N250,000, four wristwatches, a 50-inch LG television, two shirts and two pairs of cover shoes.

The two were arraigned together with their accomplices, Rasaq Bolaji and Beatrice Elom, on 15 count charge before the court.

According to the charge by the police, Eze and Adewale, alongside one Monday Uvi and others still at large, invaded the judge’s home armed with a berretta pistol, a cutlass and a cudgel and disposed him of his belongings.

Apart from the judge, the gang also in different operations robbed one Mr and Mrs Odunlami, one Montego Oil Company, one Dr Matthias Kelvin and Olukemi Kelvin and one Damilola Akinwale.

The police, in the charge sheet, alleged that 34-year-old Eze and 35-year-old Adeware carried out their armed robbery operations on the counsel of the third defendant, 50-year-old Bolaji, who conveyed them in a green colour Honda Accord to the sites of the operations and back to their different houses.

The fourth defendant, 55-year-old Beatrice Elom, was accused of receiving N2.4m “being proceeds from armed robbery operations” from Eze, “a person you know or have reason to know that he does not have means.”

The prosecution said defendants acted contrary to and were liable to punishment under Section 1(2)(a) and (b) of the Robbery and Firearms (Special Provision) Act Cap R11 Laws of the Federal Republic of Nigeria 2004.

However, upon their arraignment before Justice Ayokunle Faji, they pleaded not guilty to the entire 15 counts pressed against them.

The prosecuting counsel for the police, J.I. Eboseremen, prayed the court for trial date and an order remanding the defendants in the prison custody.

The defence counsel, Sodiq Sulaimon, noted that he would be filling bail applications for his clients.

Justice Faji, while adjourning the case till September 28, directed the parties to file written addresses to convince him that the Federal High Court had jurisdiction to hear the case.