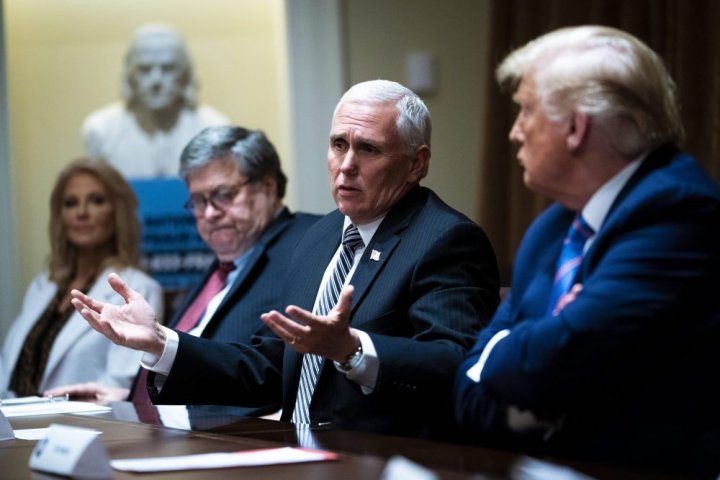 U.S. Vice President Mike Pence, head of the White House’s coronavirus task force, falsely claimed on Monday that new COVID-19 infections had flattened out in the state of Oklahoma ahead of Donald Trump‘s upcoming MAGA rally in Tulsa.

“In a very real sense, they flattened the curve,” Pence said during a round-table event on Monday, while sitting beside Trump. “The number of cases in Oklahoma has declined precipitously, and we feel very confident going forward with the rally this coming weekend.”

Pence’s claim about coronavirus cases is false, according to government data. Oklahoma has seen its highest single-day spikes in new cases over the last week, including 186 new coronavirus infections on Monday, according to the state’s department of health and the New York Times’ running case tracker. The number of coronavirus-related deaths — which Pence did not talk about — has not changed since June 12.

Pence’s false claim emerged on the same day that he urged governors to downplay new coronavirus cases by linking those numbers to expanded testing, the New York Times reports.

“I would just encourage you all, as we talk about these things, to make sure and continue to explain to your citizens the magnitude of increase in testing,” Pence said in audio of the call obtained by the Times. “And that in most of the cases where we are seeing some marginal rise in number, that’s more a result of the extraordinary work you’re doing.”

Trump also pushed that misleading notion in front of cameras on Monday.

“If we stop testing right now, we’d have very few cases, if any,” he claimed, without any scientific evidence.

Trump’s campaign and Oklahoma’s Republican governor, Kevin Stitt, have said that nearly 1 million people requested tickets for the MAGA rally in Tulsa on Saturday, June 20. Trump supporters have already started to line up at the 19,000-seat BOK Center for the event. Pence says he will also be part of the festivities.

Many health experts, including Tulsa County Health Department Director Bruce Dart, have raised concerns about having so many people in a confined space, noting both the state and Tulsa have seen daily highs in the number of positive cases in recent days.

The Trump campaign has said that anyone who attends the rally cannot sue if they later test positive for COVID-19.

Gov. Stitt says he’s looking for a larger venue for the event, which he will also attend on Saturday.