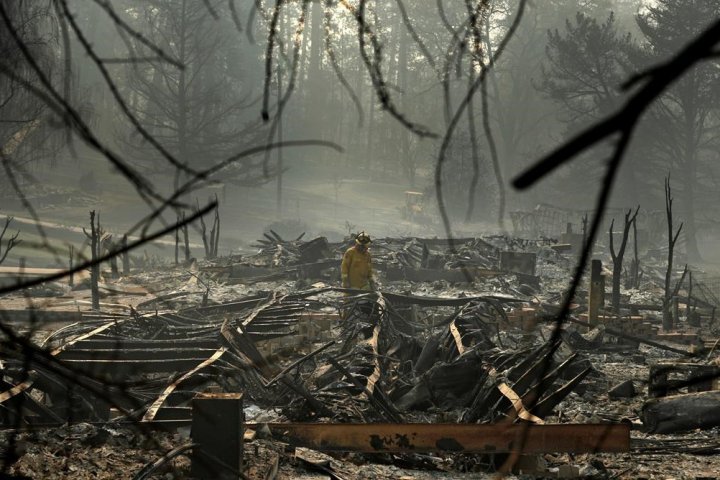 Pacific Gas & Electric confessed Tuesday to killing 84 people in one of the most devastating wildfires in recent U.S. history during a dramatic court hearing punctuated by a promise from the company’s outgoing CEO that the nation’s largest utility will never again put profits ahead of safety.

PG&E CEO Bill Johnson made the roughly 170-mile (275-kilometre) journey from the company’s San Francisco headquarters to a Butte County courthouse to plead guilty to 84 felony counts of involuntary manslaughter stemming from a November 2018 wildfire ignited by the utility’s crumbling electrical grid. The blaze nearly wiped out the entire town of Paradise and drove PG&E into bankruptcy early last year.

Besides the mass deaths it caused, PG&E also pleaded guilty to one felony count of unlawfully starting a fire as part of an agreement with Butte County District Attorney Mike Ramsey.

As Butte County Superior Court Judge Michael Deems read the names of each victim, Johnson acknowledged the horrific toll of PG&E’s history of neglect while solemnly staring at photos of each dead person shown on a screen set up in the courtroom.

“No words from me could ever reduce the magnitude of that devastation or do anything to repair the damage,” Johnson said in a statement afterward. “I hope the actions taken today bring some measure of peace.”

He also assured the judge that PG&E took responsibility for all the unnecessary devastation that it caused “with eyes wide open to what happened and to what must never happen again.”

You should also READ  Travel ban in Wuhan ‘modestly’ delayed spread of coronavirus in China: study

Johnson was hired about six months after the Camp Fire and plans to step down as CEO on June 30 when PG&E hopes to have won court approval for its plan to get out of its second bankruptcy case in 16 years. A mostly new board of directors recently announced by PG&E as part of a deal with California will hire his replacement.

The extraordinary court hearing was set up to publicly shame PG&E for past practices that emphasized boosting profits to keep investors happy instead upgrading and maintaining its crumbling equipment to protect the 16 million people who rely on the utility for power.

Many of the fire’s victims were elderly or disabled. They took desperate measures to save themselves.

Dennis Clark, Jr., 49, was found in the passenger seat of a car his 72-year-old mother was driving. Their car was in a line of three other vehicles with bodies of victims in each one.

Sara Magnuson, 75, was found inside her home, wrapped in a wet carpet in the bathtub in a futile attempt to save herself.

More than 20 family members of the people killed are expected to make statements in court Wednesday. Deems is expected to formally sentence PG&E either Thursday or Friday, though no one will be imprisoned for the company’s crimes.