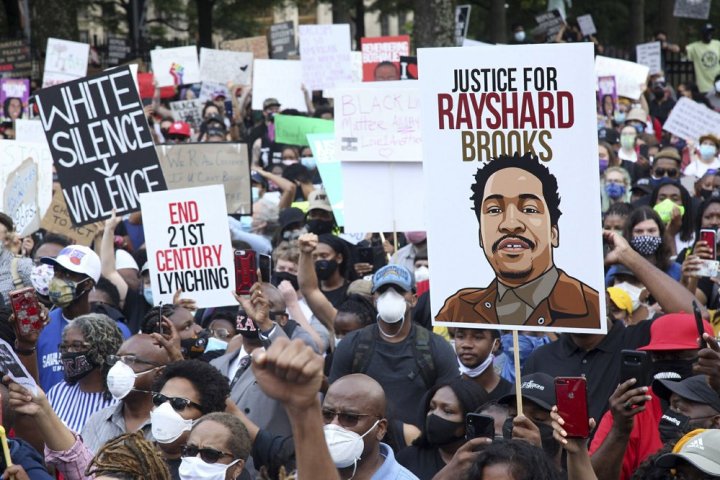 It started off as routine: a man asleep in his car in a fast-food drive-thru. But it rapidly spun out of control when Atlanta police tried to handcuff and arrest Rayshard Brooks for being intoxicated.

Video of the scene from late Friday shows the 27-year-old Black man wrestling with two white officers, taking a Taser from one of them, running a short distance through the Wendy’s parking lot, and then pointing the stun gun toward one. That officer shot him twice in the back, killing him.

How did it all go so wrong so fast? And what, if anything, could officers have done to defuse the situation?

Law enforcement experts say the answers to those questions are complicated and not as clear-cut as in the recent death of George Floyd, the Black man who was pronounced dead after a Minneapolis officer put his knee on Floyd’s neck for nearly 9 minutes.

Among the questions being asked: Instead of arresting Brooks, couldn’t officers have just taken away his keys and let him walk home or get a lift from someone? Could the officers have said or done something else to help keep him calm and safely place him under arrest?

And why did one of the officers shoot him rather than just let him run away and catch him later, since they already had his driver’s license information?

“It’s not an open-and-shut case. The DA has a hell of a choice on his hands to deal with this case,” said Timothy T. Williams Jr., a use-of-force expert who spent nearly three decades with the Los Angeles Police Department. “It’s a very complicated case.”

The officer who killed Brooks has been fired, and the other officer has been put on desk duty. Atlanta’s police chief has resigned. The district attorney expects to decide by midweek whether to charge the officers.

Some observers said the officers had options other than to arrest Brooks, especially at a time when the coronavirus is making jails more dangerous.

“They could have easily waited and caught him later,” L. Chris Stewart, the Brooks family’s lawyer, said on NBC’s “Today” show. “It was just unnecessary.”

Williams said it’s not that easy and called efforts to second-guess the decision to arrest Brooks Monday-morning quarterbacking.

“You’re trained to enforce the law. If there are laws being broken in front of you, you have an obligation, a legal obligation, to do what has to be done,” he said.