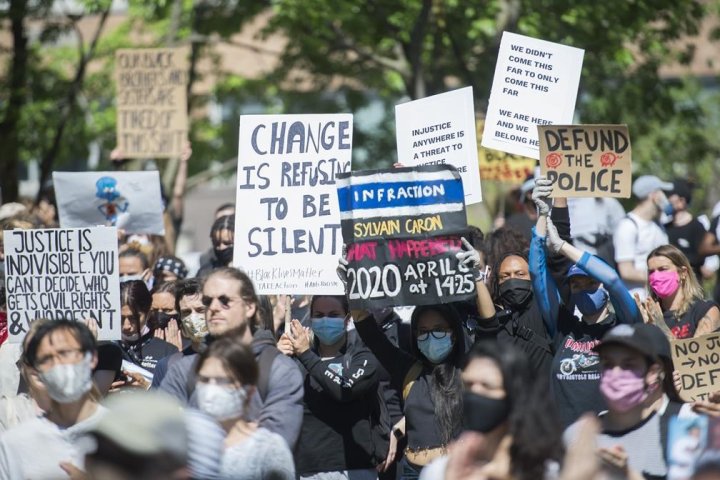 More Canadians are questioning their trust in the police as protests against racism and police brutality sparked by the killing of George Floyd last month sweep across North America, a new poll suggests.

While the majority of Canadians remain largely trusting of their law-enforcement agencies, the Leger and Association for Canadian Studies survey shows a noticeable drop in the number who said they trusted the police somewhat or a lot in recent months.

Seventy per cent of survey respondents over the weekend indicated they trusted the police a lot or somewhat — a decline of nine percentage points from May and 11 points from April.

The decline coincides with the May 25 killing of Floyd, a Black man, by white police officers in Minneapolis, which was captured on video and has since sparked anti-racism protests in the U.S. and Canada as well as calls for changes to police conduct.

“It does signal that a percentage of Canadians are asking themselves questions about how police forces are doing their work,” Leger executive vice-president Christian Bourque said of the survey results.

On that score, the poll found that 90 per cent of respondents were in favour of police wearing body cameras while 87 per cent supported providing more hours of training for officers on relations with visible minorities.

RCMP Commissioner Brenda Lucki said last week that she had agreed to equip some Mounties with body cameras and calls have been growing for other police forces to follow suit to increase transparency and curb police brutality in Canada.

Yet only 52 per cent of respondents supported the idea of prioritizing the hiring of visible minorities by police services while 32 per cent were in favour of taking firearms away from officers patrolling urban centres on foot.

Bourque could not immediately explain why respondents were lukewarm to putting a premium on hiring more visible minorities, and said that there is also limited support for disarming police in the same way as countries such as Britain have done.

“Anything that has to do with disarming police officers, Canadians do not seem to see that from a very positive perspective.”

The online poll was conducted June 12 to 14 and surveyed 1,527 adult Canadians. It cannot be assigned a margin of error because internet-based polls are not considered random samples.

The poll also found the majority of Canadians support extending the Canada Emergency Response Benefit, the $2,000-a-month payment the federal government established to help those whose livelihoods have been affected by the COVID-19 pandemic.