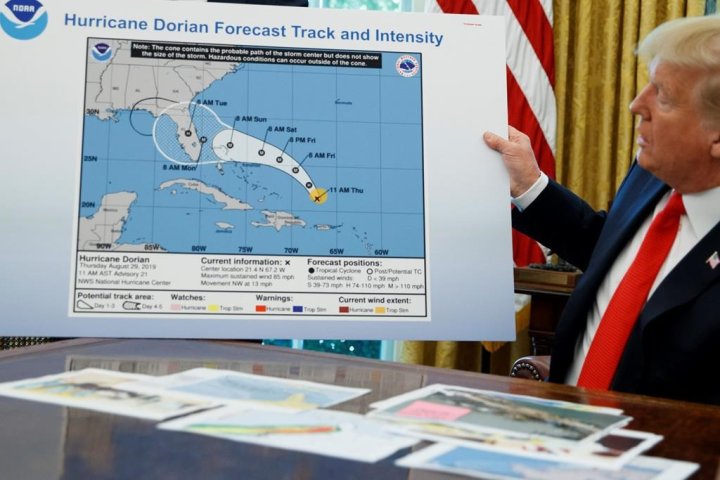 The head of the U.S. agency that warns of dangerous weather violated its policy on scientific integrity with a statement last year backing a tweeted forecast by President Donald Trump about the path of a hurricane, according to a report released on Monday.

Trump wrote on Twitter on Sept. 1 that Alabama would be among U.S. states that would “most likely be hit (much) harder than anticipated” by Hurricane Dorian, then one of the most powerful Atlantic storms on record.

Within minutes, the National Weather Service (NWS) office in Birmingham, Alabama, responded by saying that Alabama would not see any impacts from Dorian.

After days of controversy, the National Oceanic and Atmospheric Administration (NOAA), part of the Commerce Department headed by Wilbur Ross, released a statement on Sept. 6 saying the Birmingham tweet was “inconsistent with probabilities from the best forecast products available at the time.”

A report conducted on NOAA’s behalf by a panel set up by the non-partisan National Academy of Public Administration (NAPA), found the NOAA’s acting administrator, Neil Jacobs, and its former deputy chief of staff and communications director, Julie Kay Roberts, violated the agency’s scientific integrity policy with the statement.

In a memo posted along with the report on the NOAA’s website, Stephen Volz, the NOAA official responsible for scientific integrity, said the NAPA panel found the pair did so “intentionally, knowingly, or in reckless disregard” of the code of conduct.

In his memo, Volz said Jacobs and Roberts did not believe it was a good idea to release a statement, but “felt significant external pressure to do so.”

The controversy became known as “Sharpiegate,” after Trump displayed a modified NOAA map to depict the storm threatening Alabama.

The New York Times reported last year that Ross threatened to fire top employees after the Birmingham office contradicted Trump and that then acting White House chief of staff Mick Mulvaney had directed Ross to order the NOAA to disavow the NWS tweet.

In a statement on the NOAA website responding to the NAPA report, Jacobs said its analysis was based on the premise that either Trump’s tweet, or that from the Birmingham office was right, and the NOAA was choosing between the two, which was not the case.

“NAPA never questions or refutes the scientific veracity of the actual statement,” he said.