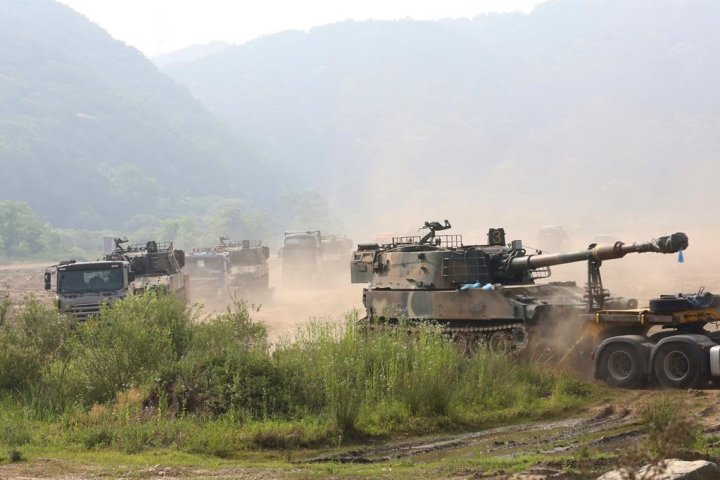 The announcement came a day after North Korea destroyed an inter-Korean liaison office in a choreographed display of anger that puts pressure on Washington and Seoul amid deadlocked nuclear diplomacy. The demolition was the most provocative act by North Korea since it entered nuclear talks in 2018, though the building in its border town of Kaesong was empty and the North had previously signalled plans to blow it up.

The North’s General Staff said military units will be deployed to the Diamond Mountain resort and the Kaesong industrial complex, both just north of the heavily fortified border. Those sites, once symbols of inter-Korean co-operation, have been shuttered for years due to inter-Korean disputes and the economic sanctions imposed on North Korea because of its nuclear program.

The North said it will resume military exercises and reestablish guard posts in border areas and and open front-line sites for flying propaganda balloons toward South Korea. It said it’ll upgrade front-line military readiness to “top-class combat duty system,” while citizens are ready to “launch the largest ever leaflet scattering with a blitz.”

These steps would end September 2018 agreements reached during inter-Korean diplomacy that were aimed at lowering military tensions at border areas.

You should also READ  Aid groups alarmed by ‘little to no’ U.S. humanitarian assistance for COVID-19

Under those agreements, both Koreas halted live-firing exercises, removed some land mines and destroyed guard posts inside the world’s most heavily armed border. Some outside experts have said these moves undermined South Korea’s security more as the North’s nuclear weapons arsenal remain intact.

Some outside analysts predicted North Korea would resort to provocation to wrest outside concessions because its economy has likely worsened under the persistent U.S.-led sanctions and the coronavirus pandemic. North Korea may also be frustrated because the sanctions prevent Seoul from breaking away from Washington to resume joint economic projects with Pyongyang.

The North’s official Korean Central News Agency on Wednesday said the hard-line steps were taken to retaliate for South Korea’s failure to prevent activists from floating propaganda leaflets across the border.

The building destruction was a “reflection of the zeal of our enraged people to punish human scum who challenged the noblest dignity and prestige of our country and those who sheltered the scum, perpetrators of shuddering crime.”

It said the destruction was the first step in the retaliation and North Korea will set the intensity and timing for its additional steps while closely monitoring South Korean moves. “Under such an acute situation as now, shameless and reckless attitude and response of the South Korean authorities will lead to our tougher retaliation plans,” it said.

The liaison office, built with South Korean money at a reported cost of $8.3 million, was opened days before the 2018 tension-reduction deals were reached. It was the first such office established between the Koreas since their 1945 division.