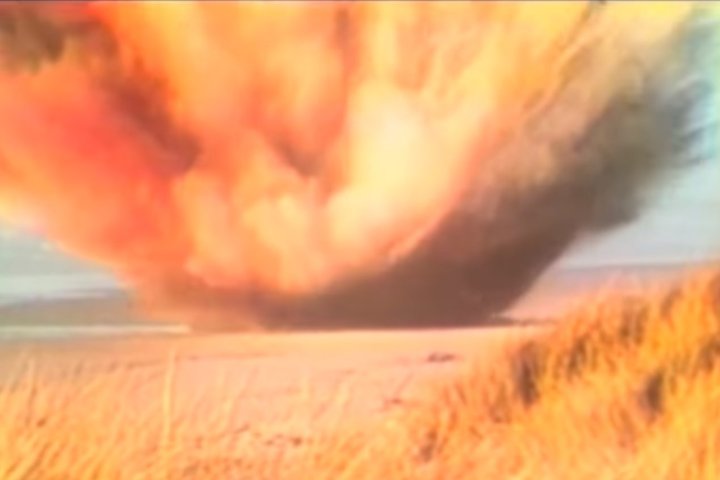 Folks in Oregon stuffed dynamite in a dead sperm whale and blew it up 50 years ago. It went about as well as you might expect: the whale carcass exploded like a firework and bits of charred blubber rained down on disgusted onlookers who’d gathered on the beach to watch.

Locals have been telling and re-telling that whale tale ever since — and now, there’s a park to honour the moment.

Florence, Ore., has unveiled a new public space to commemorate its most unusual claim to fame. It’s called Exploding Whale Memorial Park, because, of course it is.

“We asked the community for name suggestions, narrowed those 120-plus names down to nine, and had the community vote on them,” Megan Messmer, Florence’s city project manager, told the Oregonian newspaper.

Officials had hoped to unveil the name at the city’s annual spring celebration, but the threat of the novel coronavirus blew those plans out of the water,  KATU reports.

The new space is basically just a park on the sandy shore of Sislaw River, according to a description on the city’s website. There are no dead whales or sticks of dynamite on hand, although the park does have a smiling sperm whale mascot (whom you can’t blow up).

The infamous sperm whale was already dead when it washed up on the beach near Florence on Nov. 9, 1970. The rotting corpse became a major problem for the locals, who could reportedly smell it from a great distance. It measured about 13.7 metres (45 feet) long and weighed in at more than 7,200 kilograms (eight U.S. tons), making it a difficult challenge for the local department of transportation to address.

State highway officials ultimately decided to dispose of the whale by blowing it up with a half-ton of dynamite.

Locals gathered on the beach on Nov. 12 to watch the spectacle, which was captured in a now-infamous report by KATU reporter Paul Linnman.

He explained in his report that officials didn’t want to cut up, burn or bury the whale, so they settled on the explosive approach for … reasons?

“The hope was the long-dead Pacific grey whale would be almost disintegrated by the blast, and that many small pieces still around after the explosion would be taken care of by seagulls and other scavengers,” Linnman said in the report.

“I’m confident that it’ll work,” George Thornton, the engineer behind the effort, told Linnman at the time. “The only thing is, we’re not sure just exactly how much explosives it’ll take to disintegrate this thing.”