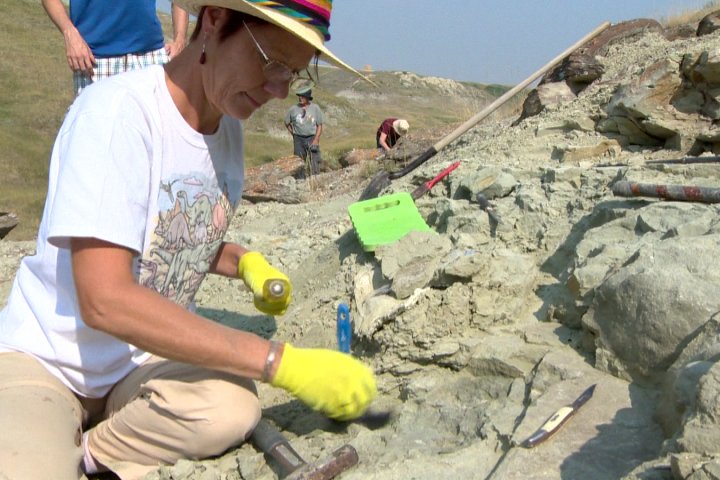 Researchers believe they have cracked the mystery of why fossilized eggs of only a few types of dinosaurs have been found.

A paper published Wednesday in the journal Nature suggests eggs missing from the fossil record may have been soft, like a turtle’s, instead of hard, like those of a bird.

One of the authors of the study, University of Calgary paleontologist Darla Zelenitsky, said many fossilized eggshells have been found for certain bird-like, meat-eating dinosaurs as well as some long-necked and duck-billed plant-eaters.

Eggs of other dinosaurs — especially more primitive species — have been notably absent.

“Over the years, we had certainly entertained the idea that dinosaurs may have laid soft-shelled eggs. Others went so far as to entertain the idea of live birth,” said Zelenitsky, who specializes in dinosaur eggs and nesting sites.

The international research team looked at egg clutches unearthed in Mongolia and Argentina with an unusual thin halo surrounding the fossilized embryos.

The Mongolian eggs, which were oval and up to 15 centimetres long, belonged to a horned dinosaur estimated to be between 71 million and 74 million years old. That species, Protoceratops, is an ancestor of dinosaurs discovered in Alberta that may have also laid soft eggs.

Zelenitsky said that could be why, after 30 years of egg discoveries in Alberta, no hard-shelled eggs belonging to large horned dinosaurs have been found there.

The spherical, 12-centimetre-wide eggs found in Argentina belonged to a small, long-necked dinosaur called Mussaurus and date back 200 million years.

Study co-author Jasmina Wiemann, a PhD candidate at Yale University, used cutting-edge technology to examine the molecular composition of the fossils without damaging them.