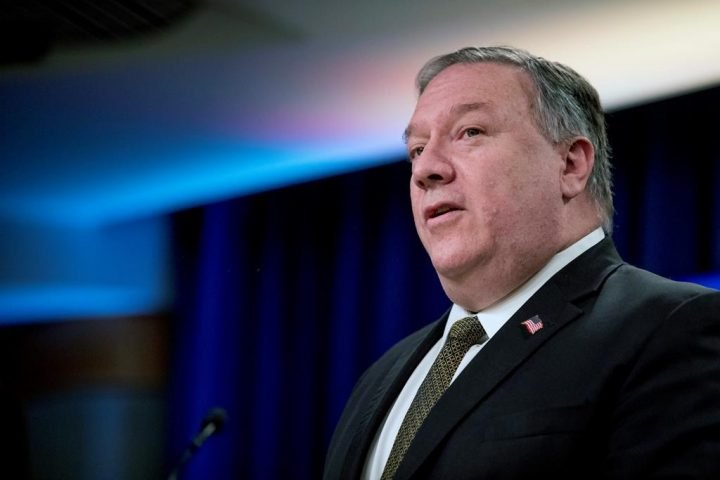 Pompeo and his deputy Stephen Biegun held closed-door talks with the Chinese Communist Party’s top diplomat, Yang Jiechi, at Hickam Air Force Base in Honolulu, according to a senior State Department official on the base. No reporters were allowed to travel with Pompeo and Biegun, and coverage of the event was expected to be extremely limited.

The meeting, which lasted more than six hours including a lunch break, wrapped up about 3:50 p.m. Hawaii time (0150 Thursday GMT), said a senior State Department official who attended it.

The discussions, which were expected to cover a wide range of contentious issues that have sent relations between the two countries plummeting, got underway shortly after explosive details from a new book by Trump’s former national security adviser John Bolton began to emerge.

On Wednesday, Trump signed a bill that seeks to punish China for its crackdown on the Uighurs and other ethnic minorities. The legislation, which Congress passed with little opposition, includes sanctions on Chinese officials involved in the mass surveillance and detention.

You should also READ  Families wait for remains of victims, answers after Thai mall shooting

Trade and human rights — along with China’s policies toward Hong Kong and its response to the coronavirus pandemic — were among the most divisive matters expected to be on Pompeo and Biegun’s agenda with Yang.

In his book, Bolton writes that Trump appealed for Xi’s help in getting a second term at a G-20 leaders dinner in Osaka, Japan.

“Trump then, stunningly, turned the conversation to the coming U.S. presidential election, alluding to China’s economic capability and pleading with Xi to ensure he’d win. He stressed the importance of farmers and increased Chinese purchases of soybeans and wheat in the electoral outcome,” Bolton wrote.

Bolton also wrote that Pompeo, who led Trump’s early outreach to North Korean leader Kim Jong Un before handing the reins to Biegun, was highly skeptical of the effort and never believed a deal was possible. Biegun’s presence at the Hawaii meeting suggested that deadlocked U.S.-North Korea talks would also be a topic of conversation.

The State Department had no comment on any aspect of Bolton’s book and referred questions to the White House.

Despite Bolton’s portrayal of Trump being enthralled with Xi, China has become a key element in the 2020 presidential campaign, with Trump and his supporters seeking to make the administration’s tough stance with Beijing a main foreign policy selling point. They have also painted Democratic candidate Joe Biden as being soft on China.